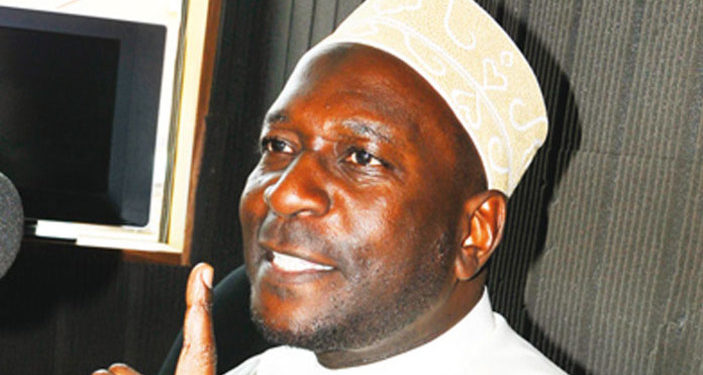 Since last week, news about Sheikh Nuhu Muzaata Batte being critically ill has been making headlines on different media platforms.

It is alleged that for months now, the vocal Muslim cleric has been unwell but the situation got out of hand when one of his wives Kulthum Nabunya moved out of their marital home in Kawempe after a bitter fight with the former.

“At the beginning of August, he barked at her when visitors were there and this humiliated her. She packed her things and left the home and this deteriorated Muzaata’s health diminishing his immunity because he couldn’t take care of himself for the last 4 months,” a family source told Mulengera news website.

Muzaata is currently admitted at International Hospital Kampala (IHK) where he has been confined in ICU since Sunday.

Friends and relatives have since advised Kulthum to quickly make up her mind and go back to look after her husband.

Kulthum who works for Kampala Capital City Authority (KCCA) and Muzaata have three children together. And it was Muzaata’s efforts that enabled her to get the KCCA job during the time of Jennifer Musisi.

However, Kulthum has remained adamant vowing only to return if Muzaata commits himself in writing that he will never bark at her again.

Here are some of the facts you didn’t know about Sheikh Muzaata:

1.Sheikh Nuhu Muzaata Batte was born in the 1950s, to the late Adam Muzaata in Bwaise, Lufula Zone. Sheikh Adam was a well known Islamic religious healer. Hue used the Holy Quran to treat the sick.

2.Muzaata’s father died in 1990 and was buried in Kazo, a Kampala suburb next to Bwaise. But later on, Muzaata and other family members decided to exhume and transferred  their father’s remains to Kigogwa, along Bombo road.

3.It’s said, the late Kamadi Muzaata, Sheikh Muzaata’s grandfather originated from Tanzania. He migrated to Uganda in the early 1800 and settled in Buganda region, during Buganda King Ssekabaka Ssuuna II’s reign (1830 until 1856). Kamadi Muzaata was a native doctor. He locally treated many people including one of Kabaka Ssuuna’s wives named Muganzirwazza. Muganzirwazza was the mother of Ssekabaka Mwanga II. But later on, Kamadi Muzaata shifted to Mbale where Nuhu Muzaata’s father was born.

4.But after some time, Muganzirwazza decided to offer Kamadi Muzaata a piece of land in Bwaise, such that her native doctor stays near her, and in case of any health need, he can attend to her quickly. It’s said Kamadi Muzaata accepted the request and shifted to Bwaise, where he stayed until he breathed his last. His son Adam Muzaata turned his successor, and then in the 1950s, he produced Sheikh Nuhu Muzaata Batte.

6.In 1982, Sheikh Nuhu Muzaata Batte finished his studies at Bilal and then joined the University of Madina in Saudi Arabia, where he has ordained a Sheikh.

7.After Muzaata returned home, he began doing business alongside preaching the word of Allah. He then established a tour and travel company destined to Mecca and Medina for Muslims intending to make Hijja and Umrah, a business he still runs.

8.He is the head of da’awa, Kibuli faction and Muzaata says to hold such a position, one must possess a degree in Sharia Laws, aged between 40-70 years and without any criminal record.

9. Sheikh Muzaata is a married man with two wives and children.