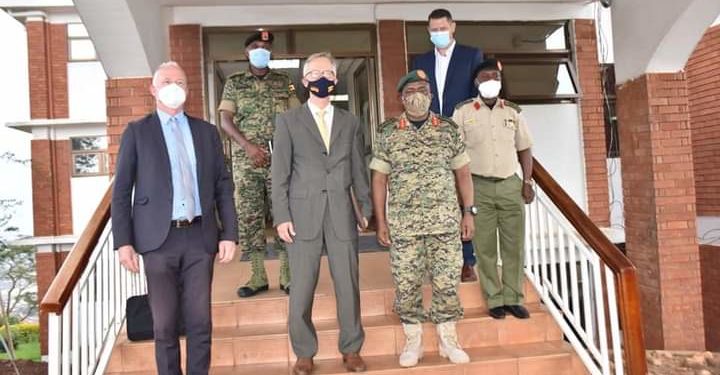 The Federal Republic of Germany Ambassador to Uganda H.E Matthias Schauer paid a Curtersy call to the ministry of Defence and Veteran affairs/UPDF headquaters Mbuya. In a brief meeting, the Ambassador and his hosts discussed issues of mutual interest in defence partnership and called upon the UPDF leaderahip ro resume from where the two countries stopped when several programs were disrupted by the COVID 19 Pandemic outbreak.

The two sides also discussed UPDF AMISOM engagements in Somalia and the role European Union where Germany is a member has played to create a resemblance of peace.

Ambassador Sichauer called upon the UPDF to continue playing a vital role in Somalia as the Vanguard of the mission.

Lt Gen Musanyufu reiterated Uganda’s position on the draw down of AMISOM Troop contributing countries slated for next year as an act that should not be determined by time but rather by existing conditions in Somalia. This he said, is in the interest of not overturning archivements and sacrifices already made to put Somalia back to it’s feet despite the donor fatigue.

The Meeting was also attended by the Germany Defence attache’ to Uganda Lt Col (GS) Stefan Hasler, a Staff Officer in the office of CDF Col Charles Kisembo, and the Deputy Defence Spokesperson Lt Col Deo Akiiki Among others.