South Sudan People’s Defense forces (SSPDF) has confirmed that two of its soldiers were killed and another captured by the Ugandan Peoples Defense Forces (UPDF) on Tuesday after a clash at the border.

Major General, Lul Ruai Koang, spokesman for the SSPDF told Radio Tamazuj on Wednesday that the incident happened when UPDF entered South Sudan territory and opened fire on their soldiers in the border town of Pogee. 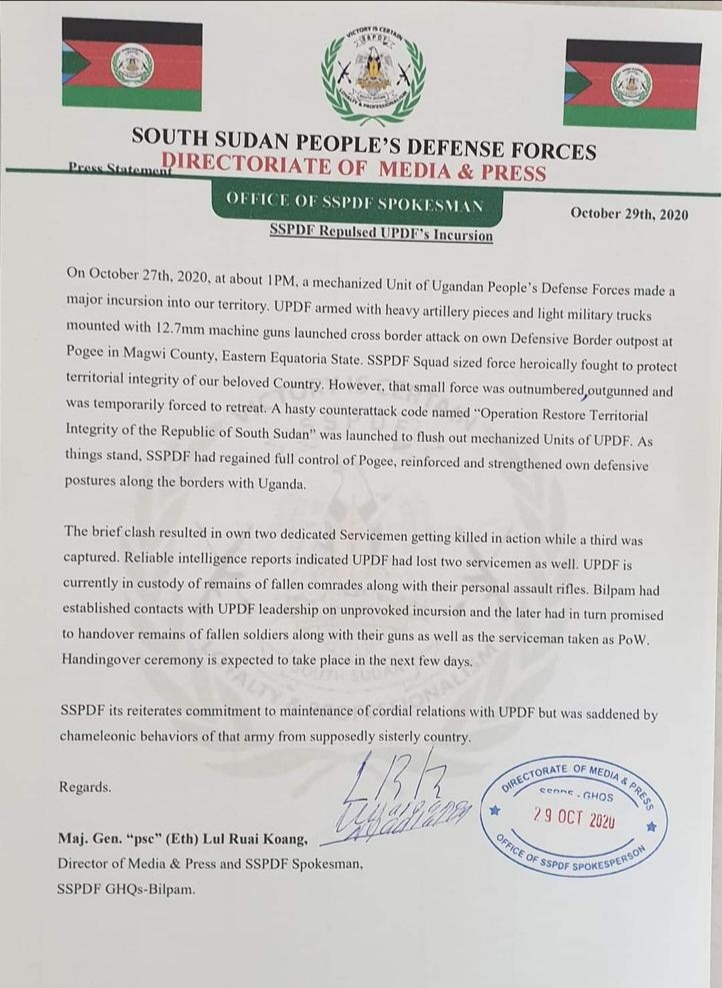 “Yesterday (Tuesday) at around 1 PM, UPDF crossed to Pogee in Magwi County and when our soldiers at the border heard heavy vehicles coming toward them, one soldier tried to see what was happening and then UPDF started spraying bullets and arrested him and when other soldiers heard the gunfire and tried to go to the area they fell into an ambush and two of our soldiers were killed,” Koang said.

“After the UPDF entered Pogee barracks, they managed to collect two bodies of SSPDF soldiers plus one soldier that was captured,” Koang said. “They were all taken by the UPDF and up to now we don’t know why Uganda army entered into our territory.”

Koang said the top military leaders from both countries are in communication and agreed that the bodies of the two deceased and captured SSPDF soldiers will be handed over to South Sudan at 10 AM in Gulu town in Uganda today.

“The people called the army and when the army tried to talk to them these guys just opened fire causing an exchange because the Ugandan side also opened fire,” she said.

According to Brigadier Byekwaso, “As a result, we killed two from the other side and we also captured one.”

She said UPDF did not lose any soldiers and that talks were on-going to resolve the issue.

When asked about SSPDF claims that UPDF entered South Sudan, Brigadier Byekwaso said, “we did not enter South Sudan but they came to Uganda to claim a motorcycle.”

John Ochan Bongomin, the area member of parliament, said they are establishing the cause of the clashes.

“Yes, I was informed although I don’t have the details I was informed that an incident occurred in Ngomoromo, there might have been a misunderstanding between our forces and the forces of Uganda at the border but somebody has gone this morning and he will inform me later about the details of what has happened,” he said.

LUKUMERI D GONAHASA: A tale of 2 COVID-19 test results and all the pain in between