by Stephen Kalema
in News, Politics
45 0 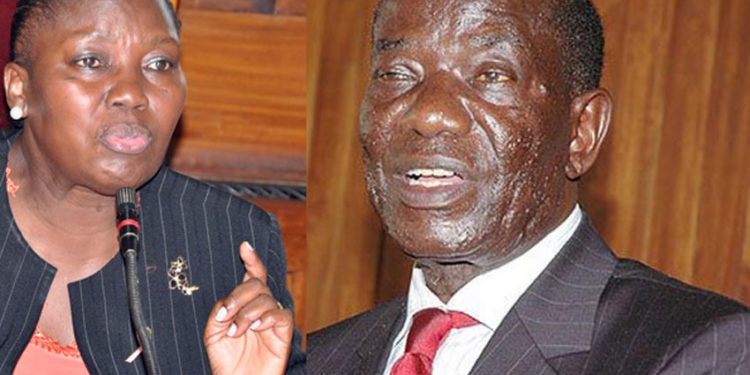 So far Uganda has had 10 Parliaments and here is a list of the Speakers who have headed these August Houses.

Before be­com­ing Ugan­da’s first Speaker of Par­lia­ment, Sir Grif­fin had served as Chief Jus­tice of Uganda from 1952-1958. Griffin’s ability to lead the first House was not doubted because he had held sev­eral po­si­tions in dif­fer­ent colonies in­clud­ing be­ing the At­tor­ney Gen­eral in the Ba­hamas in the mid-1930s and act­ing as Gov­er­nor and Chief Jus­tice for var­i­ous pe­ri­ods, therefore he had what it could take to lead. His Parliament had had 92 members. Griffin died on 2 February 1992.

Still, he emerged as a winner and continued with his Speakership. In his term, Parliament witnessed the brutality of President Milton Obote when he abolished all of Uganda’s traditional kingdoms and the declaration of Uganda as a republic. It’s also the time when Pres­i­dent Obote over­threw the In­de­pen­dence Con­sti­tu­tion and sub­sti­tuted it with the pi­geon–hole Con­sti­tu­tion af­ter falling out with the Buganda King­dom. Patel’s speak­er­ship came to an end in 1971 when General Idi Amin took over power, and re­tained all law mak­ing au­thor­ity in the coun­try, ren­der­ing the Par­lia­ment un­nec­es­sary.

Following the dissolution of Parliament, Narendra remained in the country doing his private law practice, however when Amin passed the decree ordering all Ugandans of Asian origin to leave the country in 1973, he left for India, and after a few years, he migrated and settled in Darwin, Australia, where he continued his legal practice. He still lives in Australia.

Following the overthrow of Idi Amin in April 1979, a new legislative body known as the Uganda Legislative Council was established and dur­ing the 1979 Moshi Con­fer­ence in Tan­za­nia Professor Edward Rugumayo was nom­i­nated to chair the Na­tional Con­sul­ta­tive Coun­cil (NCC) which was the in­terim Par­lia­ment of Uganda Na­tional Lib­er­a­tion Front With an initial membership of 30, the membership was later increased to 120.

This legislative body continued to function until the general elections of December 1980.

He served as the Speaker of the 4th Par­lia­ment tak­ing over from Prof Rugu­mayo in 1980. This period marked the return to power of Milton Obote and the Uganda People’s Congress (UPC), following the disputed national elections of 1980. However Butagira lost his position of Speaker when Gen. Bazil­lio Okello over­threw the UPC regime on 27 July 1985 by a military coup, he, however, continued to be a Mem­ber of Par­lia­ment from 1989 to 1996. He was later made an am­bas­sadors to Ger­many, a po­si­tion he held un­til re­cently when he was re­lieved of his du­ties. He be­came the Per­ma­nent Rep­re­sen­ta­tive to the United Na­tions in July 2003.

The fifth Parliament Known as the National Resistance Council (NRC), was established following the end of the Ugandan 1981-1985 guerrilla war. Starting with 38 historical members of the National Resistance Movement and National Resistance Army, the legislative body was gradually expanded to include representatives from around the country. The speaker during the Fifth Parliament was Yoweri Museveni, who also concurrently served as the President of Uganda. In 1993, the NRC passed the Con­stituent As­sem­bly Statute that es­tab­lished and pro­vided for the elec­tion of the Con­stituent As­sembly Del­e­gates that worked on the for­mu­la­tion of the new con­sti­tu­tion.

The sixth Parliament had two speakers, the first was,

Wapakhabulo was the first elected Speaker of Par­lia­ment af­ter the pro­mul­ga­tion of the 1995 Con­sti­tu­tion of the Re­pub­lic of Uganda. In 1998 he was appointed as the National Political Commissar in the no-party political system until 2001 when he became Second Deputy Prime Minister He is always remembered for strongly op­posing the lift­ing of term lim­its in 2005. He is also termed as the best Speaker Uganda has ever had. He was a recipient of Nalubaale Medal for civilian activists that had assisted during the guerrilla war. Upon his death, the by then Vice President Gilbert Bukenya proposed that Parliament Avenue in Kampala be renamed Wapa Avenue in honour of Wapakhabulo. He died at his home in Bugolobi in Kampala on 27 March 2004 and was laid to rest at Mafudu Village, Sironko District.

Ayume joined elective politics in the 1990s as elected to Member of parliament representing Koboko District. In 1998 as Speaker of the House until 2001 when he was appointed Attorney General and represented Uganda in the International Court of Justice in a case where Uganda was accused of invading DR Congo and allegedly plundering its natural resources” Unfortunately on Sunday 16 May 2004, Ayume was involved in a fatal automobile accident at Nakasongola on the Kampala-Gulu Highway and died.

He was later elected MP for Bukoto County Cen­tral, Masaka, in 1996, a con­stituency he has rep­re­sents to date. He first served as Deputy Speaker un­der two Speakers that is the late James Wa­pakhab­ulo and Francis Ayume 1996 to 2001.

According to the former leader of opposition Ogenga Latigo. Ssekandi will be remembered of his negative rulings such as the decision to release Shs 150 billion for CHOGM, the removal of Henry Banyenzaki from the Standing Budget Committee that ‘raised serious issues about the security of tenure’, and the judgment on the National Social Security Fund (NSSF) saga, for which the opposition marched out of Parliament.