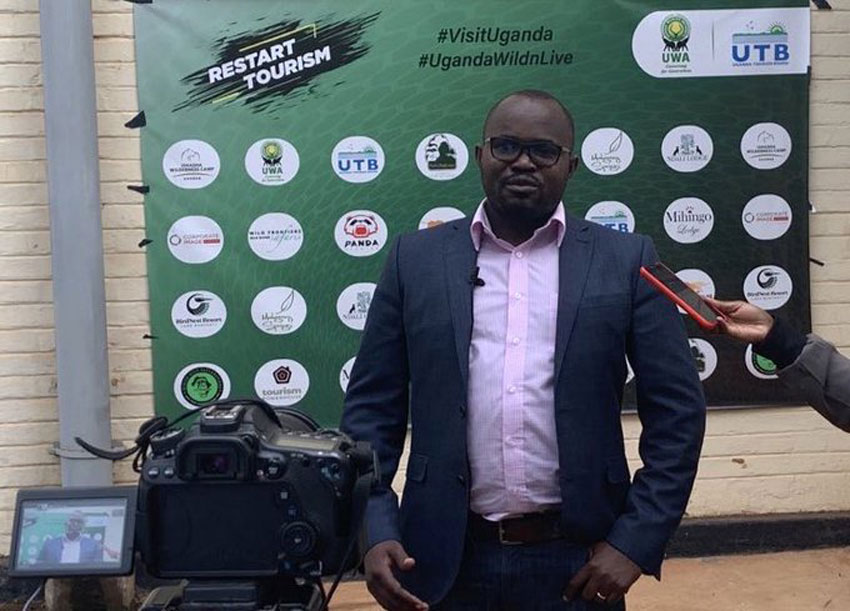 Rwamwiri, a travel marketer addressing the media on Monday

Uganda Tourism Board (UTB) in partnership with Uganda Wildlife Authority (UWA) have flagged off a team of six travel videographers and photographers that will showcase Uganda’s amazing tourist attractions as a way of promoting the sector which has been badly affected by Covid-19 pandemic.

Dubbed ‘Restart Uganda’, the campaign aims at at boasting the country’s tourism both locally and internationally.

The crew of six will be travelling across the country capturing and showcasing Uganda’s main attractions to encourage international travels to start planning to travel to Uganda ahead of planned reopening of Entebbe International Airport.

While addressing the media at Uganda Museum on Monday, Abiaz Rwamwiri the co-founder of Africa Wild Exploration said that the campaign is aimed at exposing the beauty of Uganda that the world has been missing during this six month period of the covid-19 lockdown.

He added that Tourism contributes immensely to Uganda’s economy but the last six months have not been easy, however, the good news is that there is light at the end of the tunnel, and the campaign is one of the tools that will bring back smile in the tourism industry again.

“This campaign will have both virtual component where live-streams will be through UTB and UWA social media accounts and short videos on each attraction and a full documentary at the end of the 30 days travel across the country,” Rwamwiri said.

He added that the campaign has come in such a time when the airport and border points are soon resuming to operate which will help international travellers whose bookings had been put on a halt to continue with their travel plans. The campaign will also be picked up by Uganda’s marketing firms and shared with international agents and media.

“Uganda is the only place where you can experience to the very best: Big Five Safaris in addition to mountain gorillas and chimpanzees as well as a variety of bird species. Our country is stunning and we are honoured to share it with the world. The message that we hope to send out is that all Uganda’s national parks are open; all the savanna, mountain and primate parks can’t wait to have visitors back. Uganda is ready,” Rwamwiri noted.

According to Rwamwiri, the first virtual activity will be tracking man’s closest relative, the chimpanzee on Wednesday. The campaign will have two episode and the first will be from South Western Uganda, and the team will start from Queen Elizabeth to Bwindi, Mgahinga at Gorilla heights, lake Bunyonyi at birdnest resort, Lake Mburo at mihingo lodge.

The second episode will be on Eastern, and they will start from Jinja from there they will go to Sipi, then to Kidepo and end the campaign in Murchison falls.

Paul Ninsiima the sales manager at UWA asserted that the campaign is also aimed at showing Uganda’s real beauty since many people (Ugandans) don’t know what the country has.

“As Uganda Wildlife Authority we are excited about this campaign. The world has been in need of some breath of fresh air. We have opened up our parks to the team to create content and share with the rest of the world. The team will also get to visit the mountain gorillas, engaging in a boat cruise, nature walks and game drives.”

The six experts include Rwamwiri who is a travel marketer and a communicator, Edgar R Batte a travel writer and a photographer, Julius Mugambwa a journalist and media Entrepreneur, Jonathan Benaiah nature photographer and videographer, Denis Katulume professional videographer and Geoffrey Kibisi a television producer and director.