Fact or Fiction: Was ‘Bugoma Central forest’ given away to Hoima Sugar for sugarcane growing?

by Lawrence Kazooba
in National, News
10 0 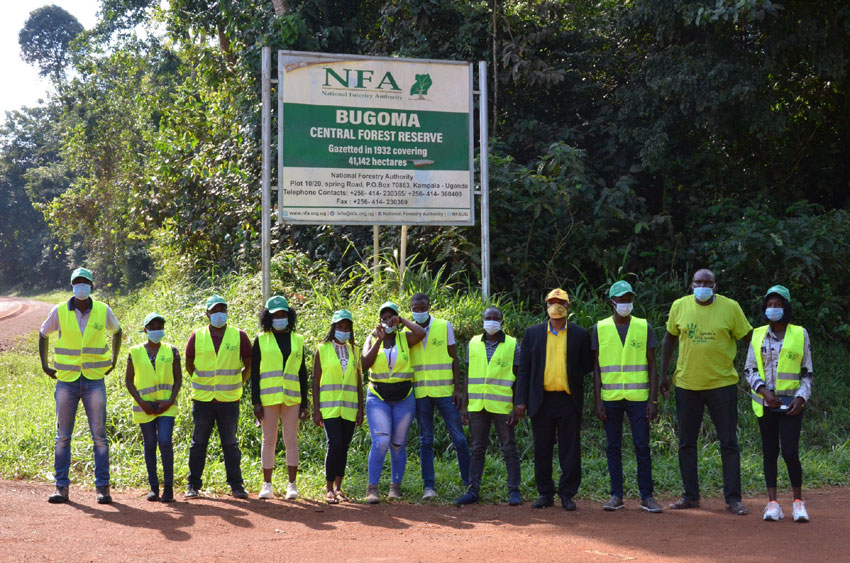 Environmentalists at Bugoma Forest on a fact finding mission

Are reports that Bugoma Central Forest in Bunyoro Kingdom was given away for destruction in favour of growing sugarcane, a fact or fiction?

A group of environmentalists sitting in their air-conditioned offices have been spitting fire, accusing among others the National Environmental Management Authority of selling their dear forest to an Indian owned company under the name, Hoima Sugar Ltd.

It turns out that the criticism is either driven by ignorance or deliberate misinformation with motive one cannot tell on the face of it.

However, speaking to people familiar with Bugoma forest and Kyangwali ancestral land, they tell a different story.

That was brought to the fore by a group of environmentalists which left their desks in Kampala and went on a fact-finding mission under a hashtag @factfinding4Bugoma, and are shocked they have been consuming a different narrative.

What they found on the ground was jaw dropping. 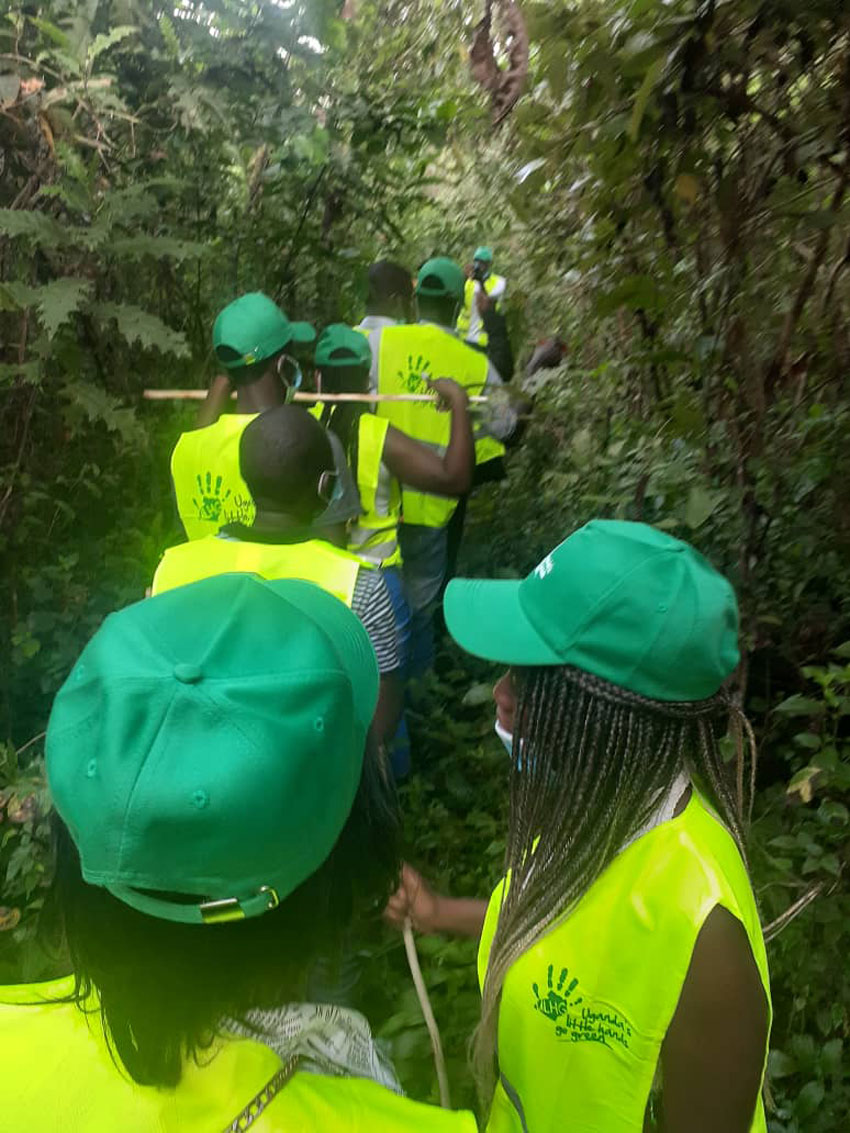 Contrary to Kampala based pseudo conservationists, the reality on ground is that Hoima Sugar Ltd accused of cutting down a forest to plant sugarcane has never cut a single tree, despite trees inside the forest being felled by various groups including timber loggers, charcoal burners, cattle grazers and farmers, among others.

On the contrary, there is a buffer zone between Bugoma forest and Kyangwali land where Hoima Sugar plans to replant a natural forest.

With some civil societies up in arms, calling the National Environmental Management Authority (NEMA) to cancel the certificate that it gave to Hoima Sugar company as approval after a thorough vetting process, for their planned Kyangwali Mixed Land Use project, it has come to the fore that there is a lot of misinformation and politicization of the Bugoma forest matter.

A twitter thread @SaveBugoma has attracted widespread criticism for Nema which has been accused of “selling Bugoma” another untruth told to gullible populations.

However, tweets trending since Friday, are showing a different picture. A group of environmentalists have spent the last three days touring the forest, as well as the Kyangwali ancestral land, which borders Bugoma forest. They spoke to locals as well as leaders in the communities surrounding the controversial land Hoima Sugar ltd wants to replant the forest and sugar cane.

Geoffrey Ewarwa tweeted, @GeoffreyEwarwa “Locals best understand the facts around natural resources within their localities so their views do matter for sustainable development. Let’s hear from them off #FactFinding4Bugoma as “save Bugoma forest takes shape”.

Another, Ismail H, added,“#BugomaIsSafe, during #FactFinding4Bugoma we interviewed the local residents to proof check if what we were hearing is true; however we were being misinformed & @nemaug is being falsely accused. There’s no development at all on ground by Hoima Sugar Ltd as reported earlier on.”

The tour organized by Little Hands Go Green concluded agreeing with a group saying Bugoma deforestation must be stopped, however, they added, Hoima Sugar is not the existential threat to Bugoma but the ongoing activities taking place in the forest under the watchful eye of National Forestry Authority officials. 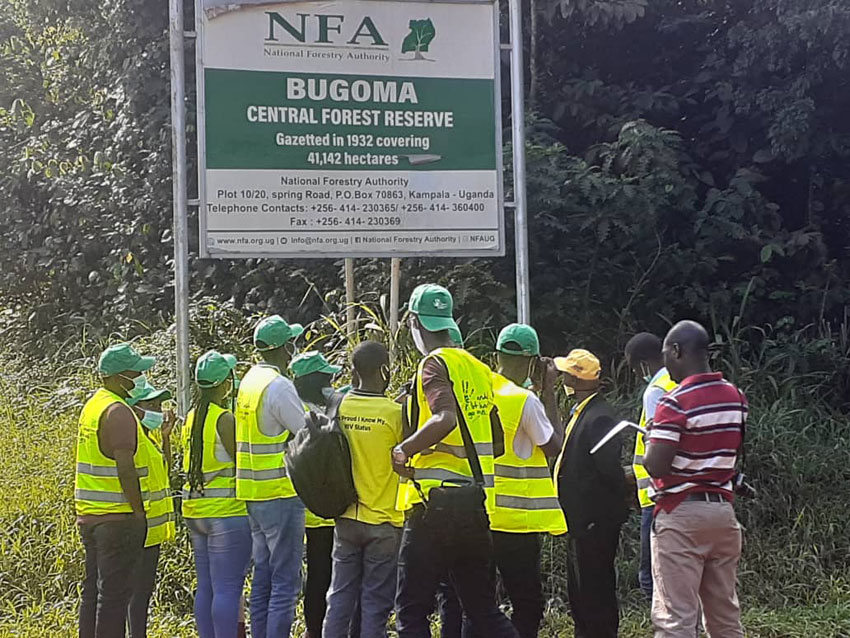 Among the elders spoken to, is Prince Apollo Kisoro, the grandson of Omukama Kabalega.

He blames @NFAUG for allowing illegal logging in the forest & charcoal burning. @YofesiM added, #BugomaIsSafe, here on ground there’s no footprint of any activity conducted by Hoima Sugar Ltd like encroachment into the #ForestReserve. Hoima Sugar Ltd hasn’t cut down any single tree from either Kyangwali Ancestral Land or Bugoma Forest.

Further scrutiny shows that the controversy surrounding Bugoma forest and the land meant to accommodate this project not are not the same; the land on which Hoima Sugar wants to grow sugarcane, is different from the Forest reserve. They just share the border.

Kyangwali Mixed Land Use project shall accommodate sugarcane growing settlements, and yet maintain natural features in the expanse including conserving wetlands, rivers and replanting forests.

In a plan presented to various government agencies ahead of the approval, Hoima Sugar committed itself to ensure the proposed Kyangwali Mixed Land Use project will maintain its rivers and streams, have access roads, a buffer zone area, cultural site, wetlands, sugarcane plantation, natural forest area, ecotourism site and an urban centre. Community settlements surrounding this zoned area are also taken into consideration.

Who owns the land?

Mr Baguma Corantine Kaleega, 58, one of the residents of the area said the land which is located in Kyangwali was given to their ancestors by Kingdom of Bunyoro by Omukama Kabalega before Kingdoms were abolished by Obote 1 Regime.

“As residents we are excited that now NEMA has issued out an EIA License to Hoima Sugar Company ltd to grow sugarcane on the land” Kaleega said. He called on Hoima sugar to make locals priority in job placements.

The sugar factory will give a boost to this locality, which is wallowing in poverty with job and market opportunities.

Kaleega said they look forward to Hoima Sugar developing their plans to build a trading centre, cultural site and replant the forest, which would bring development in Kyangwali.

People knowledgeable on the matter say, Hoima Sugar bought this chunk of land from its owner the late Prince Kimera, son of Omukama Kabalega.

“He got it a long time ago. People were encroaching on it and he sold it to Indians before he died,” said retired bishop of Bunyoro Kitara, Nathan Kyamanywa, a renowned environmentalist.

He added, “It is also not the kingdom’s land. It is Prince Kimera’s personal land.” The bishop added.

The Bishop says it took several stakeholders to understand what the conflict was about, and come to a resolution. And possibly, the CSOs campaigning against this project, should first study the dynamics on the ground.

Bunyoro kingdom has already said that there is a demarcation between the cultural land and Bugoma forest and Prince Kimera’s land.

It is however NFA which has rented out parts of Bugoma forest for deforestation and ecological use.

Bugoma CFR is a tourism hub and a home to about 600 Chimpanzees,’ contains the highest density of the Nahan’s Francolin and Grey Parrot birds among other endangered bird species. 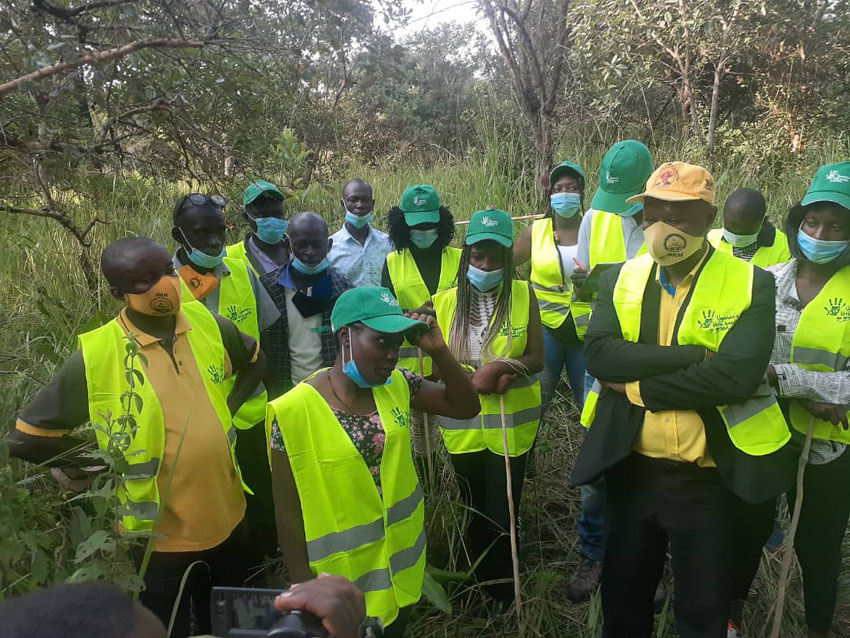 Bugoma is home to several rivers sources that recharge Lake Albert and the surrounding wetlands which act as the breeding grounds for the fish in L. Albert.

However, CSOs under the Save Bugoma Campaign say, Hoima Sugar plans to destroy over 21 square miles of Bogoma forest to plant sugarcane and other activities.

However, the campaigners are not honest with bringing out the facts of the project.

After years of studying this project, on August 20, NEMA issued a certificate of approval for the Environmental and Social Impact Assessment (ESIA) report authorizing Hoima Sugar limited. The ministry environment, including the National Forest Authority, have no objection to projects intended at making good use of this part of the land, maintain the forest area, and yet offer jobs to locals living in abject poverty.

Hoima Sugar will plant sugarcane on 9.24 sq. miles, establish an urban Centre on 1.206 Sq. miles, establish an eco-tourism center on 1.97 sq. miles and restore a forest on 3.13 sq. miles, among other economic activities. All these plans are in the pipeline and replanting the forest so far destroyed by loggers, charcoal burners and farmers, is about to start. This part of the forest which was destroyed was not a work of Hoima Sugar.