Lawyer Andrew Kasirye: I applied for a gun BUT I don’t know how to use it 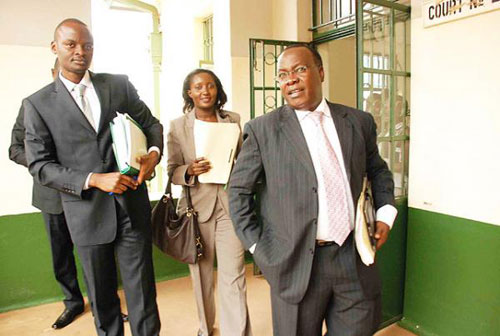 Reports that Attorney General William Byaruhanga recommended for his friend and business partner Andrew Kasirye to acquire a gun has drawn mixed feelings in the public, forcing police to open an investigation into the matter.

Reports have been all over saying Byaruhanga made a recommendation at the time police have suspended issuance of firearms to private citizens in 2018, raising complaint if the Attorney General did not have conflict of interest to access his law firm  partner in Kasirye Byaruhanga & Co Advocates, have a killing machine.

Commentators say that it was a conflict of interest for the Attorney General to throw his weight on such matters, especially when they were red tape on the process.

Kasirye, a former president of Uganda Law Society and vice president of east Africa law society, said however, although he applied for a gun, he has never gotten one. More so, Kasirye says, he does know how to use a firearm.

“At one time, I indeed applied for a firearm certificate but I never followed it up about three or four years ago. I applied, I never got it and that was it.” New Vision reported over the weekend.

Patrick Onyango, Kampala metropolitan police spokesman told New Vision that they do not have a record of Kasirye obtaining a gun.

“I have seen the recommendation by the Attorney General William Byaruhanga for Andrew Kasirye to be licensed for a firearm. I have cross checked with our security and private firearms departments and they do not have any record of Andrew Kasirye having a firearm. As police, we shall investigate the matter,” Onyango said.

However, Onyango added, it is not illegal for one to own a firearm in Uganda if they have been vetted and approved by the Inspector General of Police.

He explained that if anyone wants to acquire a private gun, he should pick a form at police headquarters and deliver it to the IGP for vetting and approval.

In 2018, The inspector general of police Martin Okoth Ochola stopped the issuance of guns to civilians to enforce an audit of all firearms in the hands of private individuals. This was at the height of several unexplained murders in the country.

About 19,000 guns were being held by civilians and private security firms in 2016, according to official figures.

LIST: Banks with the lowest, highest lending rates in Uganda 2020

LIST: Banks with the lowest, highest lending rates in Uganda 2020