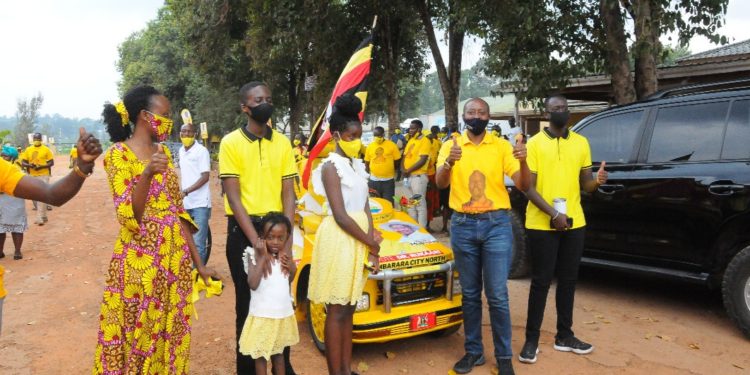 Dr Robert Mwesigwa Rukaari has launched his bid for member of Parliament in Mbarara city north by opening campaign offices.

Rukaari has put his best foot forward, by establishing himself as the most accessible candidate.

The leader of the NRM entrepreneurs lea, wants to build on his business acumen to give Mbarara an edge for business.

Mbarara is among the recently elevated municipalities to city status. Rukaari could help shape this city into one of the most modern and important urban centres in our region.

Rukaari, hopes to build on his leadership experiences and vast networks to inject a spirit of Entreprise into the people of Mbarara, especially youth and women, he says.

Already the town has proved its growth resilience, expanding into one of the biggest Towns in Uganda. Leaders like Rukaari are ingredients that shall add strategic thinking to the direction of the city.

The city of Mbarara has a national park in its neighborhood making it one of the most promising cities, endowed with more than buildings. It is a market for the largely agricultural sorrounding districts.

Hotels, factories, different companies have opened branches into the city, and there is no doubt, this is largest city in Western Uganda, home of milk, matooke and beef.

Rukaari comes in at a right moment when he can use his international partnerships as head of the chamber of trade and commerce in Uganda.

Upon his nomination, Rukaari tweeted, “Here the journey begins. I have been nominated to contest to carry the @NRMOnline official flag in the race for Mbarara City North MP seat. I urge all people of Mbarara to join me in this race to build a formidable city. #RukaariforMbararaCityNorth #eshuraensya #NewChapter”.