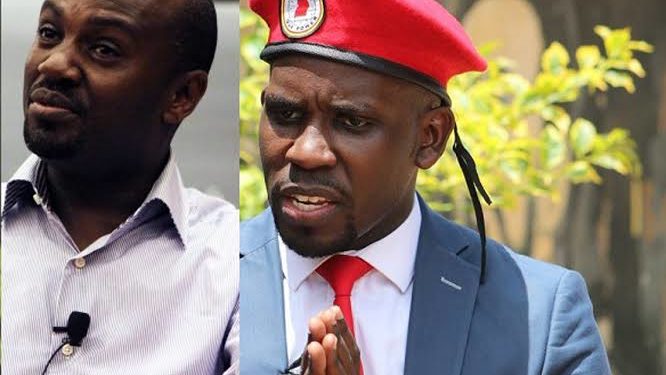 The NBS tv Media Round Table moderated by Solomon Serwanja, was full of life when Joel, got hold of Mwenda, possibly Uganda’s most decorated journalist, and took him into a pigsty. It was clear Mwenda had been beaten to his game when Joel rained all adjectives minimizing Mwenda from the all towering journalist to a mere “Kampala survivor” talking for Kawogo (daily bread).

Mwenda, who loved to be graded among the intellectuals, faced it rough and not even fellow panelists Muyanga Lutaaya or Onapito Ekomoloit would save the Independent Media boss from the attacks of Ssenyonyi. Finally, Mwenda had to walk out of his seat before the moderator closed the show, showing how unsettled Mwenda was in his seat. He finally took a challenge to register as a National Unity Platform party member to expose Robert Kyagulanyi, and his supporters as intolerant, by challenging Kyagulanyi to a contest of brains and ideas.

Joel who welcomed Mwenda and later took him to Kamwokya to receive his first political party card, castigated Mwenda for branding People Power hooligans and calling them all manners of names in his write ups and television appearances.

However, the people power spokesman held the argument that Mwenda was intolerant himself and a worse hooligan than any People Power supporter, explaining that if Mwenda had power in his hands, he would wash their organization off the face of Uganda. Joel kept dismissing Mwenda, though, saying he was a powerless person and could not do anything about the rise of the red beret movement.