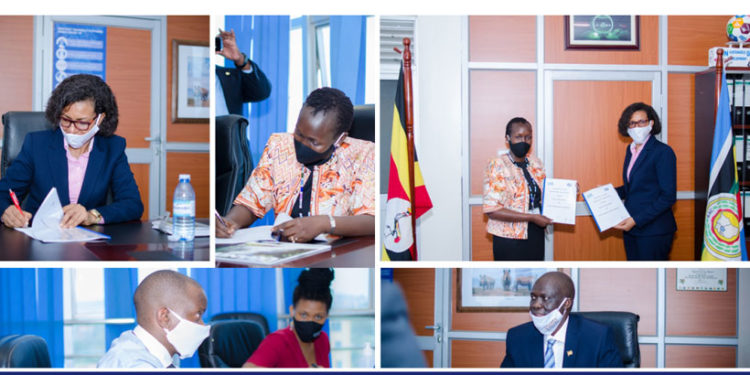 What started as a courtesy visit by the Uganda Tourism Board (UTB) Executive Director to her Uganda Communications Commission (UCC) counterpart in December 2019, this week metamorphosed into a formal partnership.

UCC and UTB are two government agencies with two distinct mandates. However, they share profound enthusiasm for the film industry in Uganda, having identified it as a potential driver of tourism, among other benefits.

A clear illustration of meeting of minds was evident during last year’s Uganda Film Festival (UFF), with UCC choosing ‘Film and Tourism in the Pearl of Africa’ as the theme, and UTB coming on board as one of the event’s sponsors.

As platinum sponsors, UTB funded the premiere of a movie and offered the Lifetime Achievement Award – a trip for two to Murchison Falls National Park for three days.

When UTB CEO Lilly Ajarova visited UCC head offices in Bugolobi in December 2019, she made it clear that the two bodies’ shared enthusiasm for the promotion of film in Uganda should be formalised. In UCC, she had found a willing partner, so her suggestion was promptly embraced.

On Monday, August 3, 2020, the two CEOs sealed the partnership by signing a Memorandum of Understanding that details how they both plan to work together to improve Uganda’s brand as a film and tourism destination.

Speaking at the signing ceremony at her office in Kampala, Ms Ajarova said the five-year partnership aims to see the two agencies work closely to increase investment in and promotion of film-induced tourism in Uganda.

“Our goal is to improve various already existing tourism products such as film and ensure that enough investment and promotion goes in that area so that the sector can thrive, especially during these unprecedented times where digital visual communication is vital for destination promotion,” Ms Ajarova said.

Among other things, the MoU is expected to tackle issues such as improved connectivity and cost of the internet, support for digital marketing of Destination Uganda, and profiling of film locations.

UTB is mandated under the Uganda Tourism Act 2008 to promote Uganda as a preferred destination for both domestic and foreign tourists and to enforce and monitor standards in the tourism sector.

Collaborate on targeted familiarisation trips for travel bloggers, film producers and crews to encourage travel and filming in Uganda.

Promote initiatives such as the introduction of tourist SIM cards by telecom providers with efficient online registration processes.

Encourage investment in film production in a bid to create employment and promote tourism in Uganda.