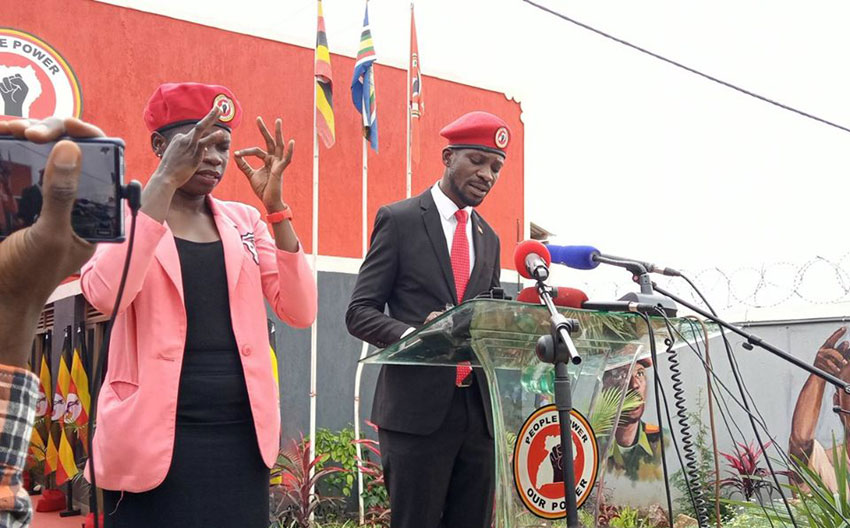 Bobi Wine during the launch of People Power and NUP merger

The Electoral Commission has revealed that National Unity Platform political party’s application to use red as its official colour has been rejected on grounds that, it was reserved and taken by Uganda Peoples Congress (UPC).

Justice Simon Byabakama – the EC Chairman explained that under NUP’s parent party – The National Unity, Reconciliation and Development, blue and white were the official party colours but had sought to change and make red the most dominant color while also maintaining the other two.

“Under the former party, it was white/blue, but they wanted to change so that red dominates. We wrote back to them and indicated that the colour is already being used or has been booked by UPC and that the request could not be entertained,” Byabakama told New Vision on Monday.

Byabakama further expressed his frustration over NUP’s continued use of red even after the Commission has already written to them over it’s rejection of the application.

Justice Byabakama further explained that only the change of party’s was accepted and gazetted by the commission from the National Unity, Reconciliation and Development, when it was still under the leadership of Moses Nkonge Kibalama.

“We don’t want UPC to ask why we allowed another party to use their colour. That is why we indicated it to them, but they did not get back to us and went ahead and launched the party colour as red,” Byabakama said.

People Power Spokesperson Joel Ssenyonyi however insists that NUP will continue using red since colours can not be a monopoly of a a particular political party, adding that red, white and navy blue are the official party colours with red being dominant.

” There has never been any law that monopolizes a color for a particular political group. That explains why FDC, NRM and all other parties have more than one colour. ” He told Watchdog Uganda in a telephone conversation on Monday.

He said NUP had written to EC over the matter, but the commission had not given the party a fair hearing and instead had shut them out.

Ssenyonyi said: “We wrote to EC they are still tossing us, they don’t want to hear us out.”

The above development means that Bobi Wine’s group who have been using red as it’s official colour since the inception of the People Power pressure group will have to change to another color especially if the EC comes out to spell out it’s penalties should they continue using the colour.

Last week, UPC party President Jimmy Akena had lamented about NUP’s continued use of the red colour despite the fact that it was registered by the Uganda House outfit.