by Mubiru Ivan
in News, Politics
51 1 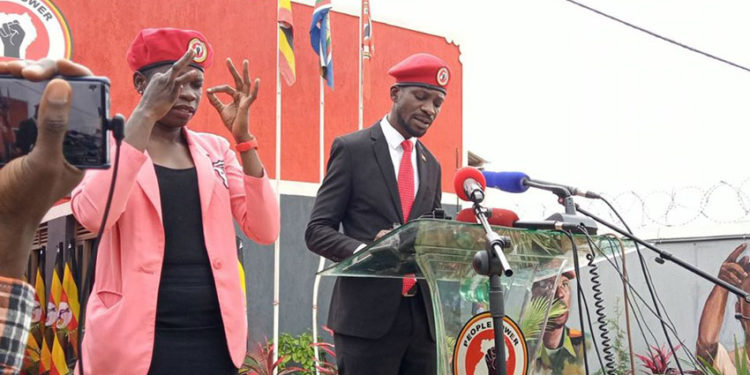 Bobi Wine during the launch of People Power and NUP merger

People Power Movement Principle Robert Kyagulanyi Sentamu alias Bobi Wine on Wednesday took over the leadership of National Unity Platform (NUP) political party as president, a party which was previously headed by Moses Nkonge Kibalama who says this was a merger between NUP and People Power at the party’s delegates conference on 14th July.

“The National Unity Reconciliation and Development Party was formed in December 2004 and we certified government requirements. We are up to date, there is nothing lacking in terms of accountability; we come here with clean hands,” Kibalama said.

Kibalama also noted that the partnership between his party and People Power has been in the making since Bobi Wine won the parliamentary elections in Kyadondo East in 2017.

“We followed him closely and wondered how his message echoed our inner feelings. We admired Mr Kyagulanyi for that matter because the issues he was concerned with were issues of Ugandans. We reached out to him and we have been talking since then.”

“Indeed, at the end of 2018, our legal team tried to reserve the name People Power, just in case we needed to formally register at some point. As expected, we found that this name had been reserved and flagged so that we could not register it,” the Kyadondo East Member of Parliament said in a statement on Wednesday.

“Since then, we have continued to struggle as a political and social movement advocating for change. Therefore, while we believe so much in multi-party democracy, we knew that the present circumstances have been largely restrictive of political parties. You have all observed the challenges encountered by parties such as the FDC. Our view then was that we should maintain the People Power Movement as the glue that brings all people together, regardless of their political affiliations.”

Bobi Wine further noted that right from 2018, their message has always been missio 2021 but for weeks and months, there has been one question from their supporters, ” What symbol shall we use in this election?”

“A few weeks back when we announced the call for expression of interest, over 10,000 people responded so that they run under our platform. Every day, we have been receiving countless calls about one thing- what is the symbol? Expectedly, all our people would want to have a uniform symbol for liberation. They know that if they go into this election as independents, the regime will ensure that the symbol which I have is not available to any other of our candidates. Therefore we must act, and act now. And today, I am very happy to announce the answer to this question.”

“Having realised that the People Power Movement itself would never be registered by the Museveni regime, it became very urgent and expedient to find a solution. And so, a few months back, when we predicted that we would find ourselves in this situation, we embarked on finding a solution. We set out to silently identify a Platform which we would use to answer this question. Although many political parties and organisations had reached out to us, our first and most important criteria was to look out for a formation which shares our values, aims and objectives. And there are many which do, but there was a political organisation whose message and objectives rhymed well with those very close to us. In order to make the message even stronger, in July 2019, we went ahead and successfully changed the name of this political organisation from National Unity, Reconciliation and Development Party to the National Unity Platform. Therefore, today I stand here to announce to the nation that we are unveiling the National Unity Platform as the political wing of the People Power Movement. The National Unity Platform is a political organisation duly registered with the Electoral Commission and our symbol is an umbrella.”

The presidential hopeful also disclosed that in the coming days, they shall embark on a process of formalising the People Power Alliance to cater for their comrades and political leaders who belong to other registered political organisations.

“The People Power Alliance shall be comprised of different political formations which we have been working with and those that will be willing to join us. Formal engagements with many of these brothers and sisters have already been ongoing and they will continue.Finally, let me reiterate that what we are launching today is largely a symbol and a political platform that will usher us into the 2021 election. Akabobero umbrella. But we shall continue to do activities as the People Power Movement. Friends, this is not a new phenomenon. Throughout history, liberation strugglists have often found themselves having to run their course with a political wing and an activist or military wing. The ANC is a political party in South Africa, but circumstances demanded that they form an armed wing called uMkhonto we Sizwe. The examples are so many.”