by Brian Mugenyi
in News, Politics
2 0 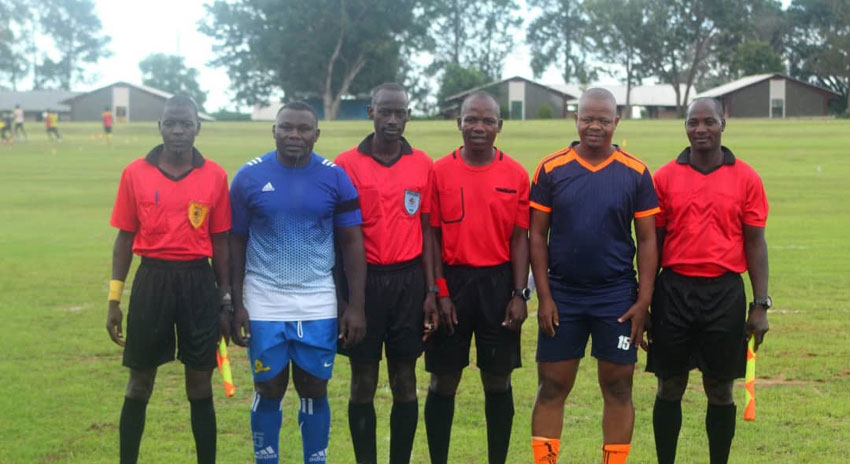 Football and politics are two things that work a treat for Michael Ssekabira. Ssekabira formerly at Kampala City Council Authority (KCCA) has now looked further beyond the pitch and the days are grand for him in the political auditorium.

Once a formidable striker at KCCA under the tutelage of Coach Mike Hillary Mutebi in 2003, Ssekabira’s shooting boots are shining now into the political arena.

“Growing up as a kid, my father (Emmanuel Masaba) had no money. The grandfather Joseph Yele Male who was back then selling fish in Nyendo market took on the mantle to pay for my school fees. In general, life was a bit tough but somehow we managed to make it through,” starts Ssekabira also the FUFA delegate in Greater Masaka.

Much as Ssekabira’s grandfather Yele was earning some dime from the fish business his grandson’s story couldn’t be in-depth without playing football.

By using football, Ssekabira was able to save the little meagre money that would have been spent to meet his school fees charges.

“In primary two we had a football game between my school (St Paul and Nyendo Public School) and after the game my grandfather was met by Masaka Baptist School officials who later convinced him with shs:700,000 and assured him with a bursary,” says Ssekabira who later joined them in 1993.

“I was a hardworking chap. Too faster and most of the students including the teachers themselves nicknamed me Mukiga,” says a cheerful Ssekabira.

As for clarity, Ssekabira says in 1995, Masaka Baptist defeated Bwala Secondary School 4-3 a game that left many with a lot of imagination.

“Tough game it was in the normal play (Laughters). But I changed the tide in the penalty shootouts and the end Standard Chartered Bank awarded me a golden watch, “says Ssekabira.

Since the beautiful game is there for the skillful players to showcase their talents, Hajji Abubaker Gainamungu –the head teacher saw a young man with loads of talents on the ball and later gave him shs: 350,000 before joining them.

The story of Ssekabira continued to intensify and several shooters started tussling for his signature.

“I studied two terms with them. I enjoyed the beautiful game with the likes of Willy Kyambadde and Tabula Abubaker but later Masaka Baptist signed me again,” said a jovial Ssekabira.

In 1996, Ssekabira started reaping heavily from the beautiful game. He was vehemently selected as the best player in Masaka District with his school Masaka Baptist emerging among the best.

With the help of Stephen Ssemutono also The Fufa delegate of Buganda Region and a Member on the competitions committee, Ssekabira walked his way to St Paul- Kitovu where they emerged victorious in the National Post Primary Football Championship.

When he completed the primary level, it was upon him to choose whether to go for secondary stage or to join technical institutions. Ssekabira choose garage and left his fans on the pitch in dilemma.

“Surely, my father wanted me to be a mechanic. When I chose the Nyendo garage it wasn’t by a mistake. However, Uzairu Ssematinde who was a fan to my footballing skills took me away to Nyendo Mixed Secondary School,” shared an emotional Ssekabira.

Since football had become part of his DNA, Nyendo FC signed him lately before Paul Hasule guided him into SC Villa-joogos who have won 16 league titles and 9 Ugandan Cup titles.

“Edgar Watson nicknamed me Junior and by then Junior Kalyesubula a son to Livingstone Kyobe was my friend,” asserts Ssekabira.

Back then, Ssekabira’s best players were Philip Ssozi and Alimansi Kadogo.

In 2001, Ssekabira was back home. He started training fairly with Masaka Local Council FC (MLC) with the likes of Tony Mawejje currently at Police FC and Vincent Kayizi.

“It was awesome playing under the tutelage of Coach Sam Timbe. But I used to play as I also attend to my studies at Masaka Secondary School,” he says.

Before joining Express, former Cranes goalie Paul Hasule had took him to Kampala Citizens where he completed his secondary level.

The doors for Ssekabira became more opened when he joined KCCA by then under Coach David Otti at age of 17.

“We used to earn shs: 140, 0000 per month what I remember is that I signed a Student License. From then on, I played my maiden game for KCCA against St George though we lost 2-0,” he articulates.

“Coach Mike Mutebi loved me so much. He is kind of arrogant but he gave me a chance to play 15 games and I scored 6 goals,” he adds.

Ssekabira says it was Coach Mike Mutebi who discovered his striking aptitude before he crossed over to Victors FC in 2005.

“For Victors FC’s case, things didn’t work out as expected and after a while I went to Lion Sport in Rwanda in 2015.

The life of Ssekabira on the pitch continued to blossom and when he signed for shalari FC in 2006 miracles started happening.

“I used to earn $ 8000 per month approximately shs: 29,641,768 thanks to Latery Babalanda (the team director). That was a breakthrough for me,” Ssekabira who also played for his clan team Effumbe and Moses Magogo’s Mutundwe Lions FC in 2010 says.

“The fans in Belgium had rebranded me as Amin since I was the only Ugandan in the Copa Dela Mol League,” adds Ssekabira who has been able to invest the money in lodges, apartments and Wab petrol station in Najjanankumbi.

The people of Belgium knew little about Uganda. According to Ssekabira, they knew the late Idi Amin since he had ruled Uganda.

“Two things: People of Masaka are business oriented and they support whoever loves the beautiful game. I’ve come to serve my people under People Power. I’ve played football locally and internationally and I was a focal person in 2015 when Buddu became the talk of the town in Masaza Cup,” he explains.

According to Ssekabira, local politicians in Masaka City formerly Municipality have not performed to their expectations.

“When you look at the politicians we have today most of them have outlived in the political arena like Mr Fred Mukasa Mbidde. I think serving the East African Parliament is the ultimate goal of any parliamentarians so Mr Mbidde should retire peacefully,” he says.

“I have invested in youths especially in Nyendo trading centre. I have been able to purchase Boda Bodas for them so that they are not redundant.”

Incumbent Masaka Municipality MP Mathias Mpuuga has already positioned himself to stand in the new Nyendo/Mukungwe Municipality where he will tussle it out with Ssekabira and other candidates such as Democratic Party vice president Mbidde and Sarah Kiyimba of National Resistance Movement.

Transformational Leadership: What Hon. Winnie Kiiza's decision not to seek re-election means for women in leadership

Transformational Leadership: What Hon. Winnie Kiiza's decision not to seek re-election means for women in leadership