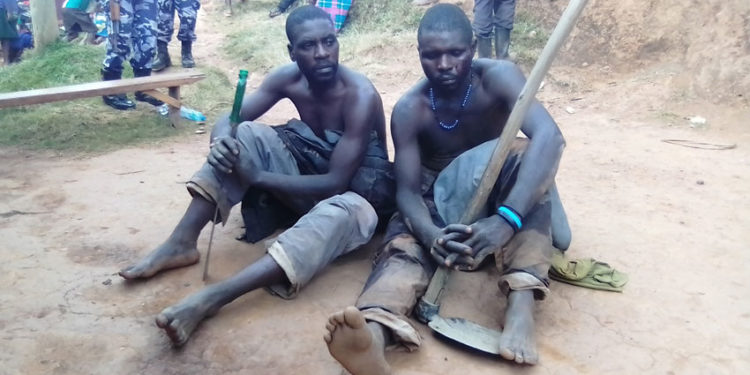 Police in Kabale District under the command of Henry Kisembo on Monday fired teargas as they attempted to arrest two wetland encroachers.

Mutungi Cosmas ,44, and Barijunaki Owen,32, both residents of Kihorongwa Village ,Rwanyana Parish Rubaya sub county in Kabale District were arrested after being accused by members of the community for encroaching Kabari wetland on the banks of Lake Bunyonyi.

Asiimwe Evas, the Kabale District Environment officer said that at least 2,000 community members from the villages of Hamuhambo and Kihorongwa Villages in Rwanyana parish agreed in February 2019 to conserve Kabari wetland to save nature, but two people rejected their decision.

According to Asiimwe, other members of the community vacated the wetland in question and stopped using it after the agreement.

“Members of the community agreed to Use the wetland for apiary and as a source of raw materials for art crafts. They were angry to see that some members had rejected to conserve nature and therefore had to act”

Kabari wetland  is equivalent to 30 hectares.

The two suspects would encroach the wetlands armed with traditional tools to defend them incase members of the community attacked them.

According to Saime Twesigomwe, the Rubaya sub county LC III chairperson, the suspects would be armed with Pangas, spears and hoes.

The suspects were arrested by police in conjunction with the Uganda Peoples Defense forces soldiers who are deployed along the Uganda/Rwanda border.

Police fired tear gas attempting to disperse community members who had gathered to witness the arrest, yet not maintaining social distancing rules aimed at stemming the spread of coronavirus.

Elly Maate, the Kigezi regional police spokesperson has confirmed the arrest, and warned the public against wetland degradation, saying efforts are underway to have more encroachers arrested and arraigned into courts of law.

Give me a break! Singer Fille tells fans why she's no longer active on social media