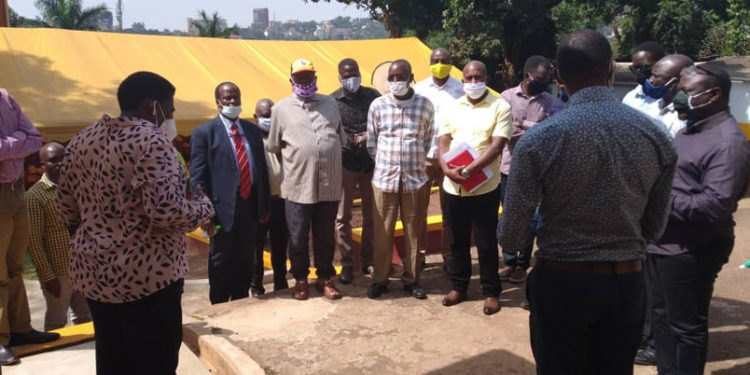 The National Treasurer for ruling party-NRM Rose Namayanja Nsereko on Thursday briefly addressed a team of 18 Zonal Coordinators who manned the party’s Membership Registration Exercise in March before it got disrupted by Covid-19 pandemic.

During the meeting, she urged members to cross check the available records to confirm if all registers were retrieved from the branches/villages to ensure that when time to finalize the process comes, they will be ready to go.

In March this year, NRM kicked off registration exercise for new members as well as update its current members list unfortunately, the exercise was cut midway due coronavirus.

According to a statement from the NRM Secretary General Justine Kasule Lumumba, the exercise was to be carried out at village/branch level by registrars assigned to perform this duty by the secretariat.

“For the villages that were in existence as of July 2015, their registers have been prepared by the Secretariat with data of their members that were registered at that time,” Lumumba said.

Lumumba said that for the new villages that were formed after July 2015, blank booklets were provided and they will also be registered.

Lumumba also said that the exercise targeted to allow members check the accuracy of their particulars on the 2015 register, collect data on their members’ gender, age, date of birth, national identification number and phone numbers.

Dr Tanga Odoi, the chairperson of the NRM electoral commission told Daily Monitor newspaper that during the meeting they were to present their proposal to CEC on how they intended to handle the primaries to select candidates for Parliament and Local Council elections.

The party primaries had been planned to start in April 2020, beginning with the special interest groups followed by those for district and Parliamentary candidates in May/June.

But in a letter dated April 22, 2020 to the Speaker of Parliament, the President, who is also the national chairman of NRM, said amid the coronavirus pandemic, the country should not spend time on electioneering.

“I have received your letter of the 23rd of March, 2020, regarding the NRM Primaries. I totally agree with the idea. The country should minimize the time spent on electioneering. Therefore, August and September, 2020 are reasonable,” Mr Museveni said.

“I will consult the CEC Members by telephone through the Secretary General,” he added.

In January, CEC endorsed lining up as a mode of voting during internal party elections. The members said lining up was in conformity with the national laws of Uganda especially the Local Government Act and would cure allegations of ballot stuffing.

We have not refused to come back home as government claims! Ugandans stranded in China over covid-19 speak out