Businessman Sudhir Ruparelia through his Ruparelia Foundation on Friday donated Shs10 million to Ngamba Island Chimpanzee Sanctuary to help feed the chimps that are threatened by starvation due the current COVID19 crisis which brought business to a stand still.

The donation was received by Joshua Rukundo, the Executive Director Ngamba Island who lauded the businessman for the generous contribution.

He said donation will cater for the wild animals facing a tough time due to the COVID-19 lockdown and rising water levels.

“On behalf of the management of Chimpanzee Sanctuary $ Wildlife Conservation Trust (Chimpanzee Trust) and on my own behalf, we would like to acknowledge and send our sincere appreciation for your generous contribution of UGX 10,000, 000 towards the feeding of chimpanzee on Ngamba Island Chimpanzee Sanctuary,” Mr. Rukundo wrote.

Dr Sudhir under his Ruparelia Foundation has supported the Chimpanzee sanctuary at Ngamba Island for more than 20 years. As the facility celebrated 20 years of existence in 2018, Sudhir adopted a baby chimp and named her Ruparelia.

The sanctuary, which is managed by The Chimpanzee Trust – a local NGO – closed its doors to tourist visitors in early March, much earlier than the government announced the general lockdown that has since dragged on for months. Chimpanzees are very much vulnerable to virus diseases than humans which has made the negative impact of the crisis more biting for them. 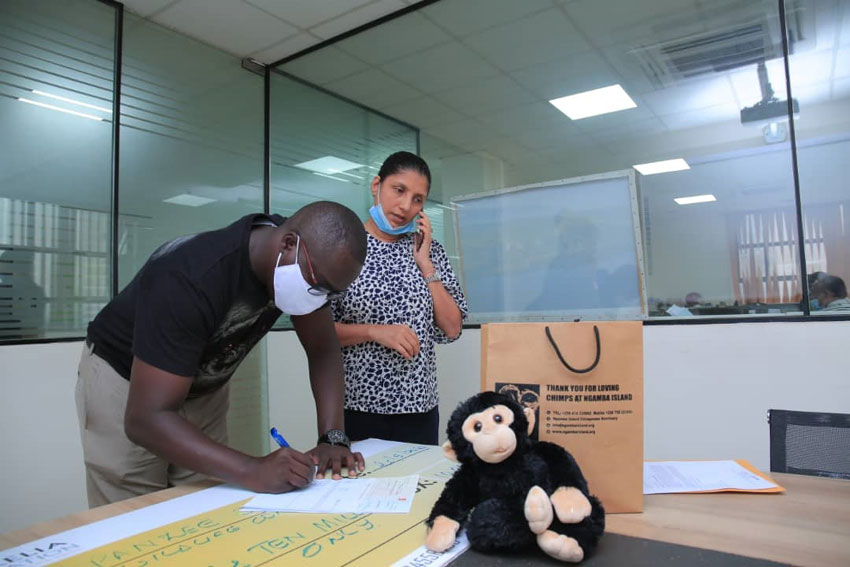 Currently home to 20 male and 30 female chimpanzees, Ngamba Island has been home to orphaned and rescued chimpanzees since 1998.

Four of the chimps have been born at the island over the years. The sanctuary provides welfare in terms of feeding, providing veterinary care and an environment for the chimpanzees to rehabilitate and live out their lives.

The trust also runs education and conservation programs for the conservation of the species and protection of their natural habitat. With the outbreak of COVID-19, business has almost come to a halt.

The chimpanzees feed on about 2,625KG of fruits and vegetables, every month, supplied now every 10 days unlike in the past where it was done every 5 days. This is done to reduce movements on the island which could boost infection chances. The chimpanzees also need about 500Kg of posho and millet in equal measure as well as another 50Kg of soy, every month!

With no support from government on operational cost, the Trust has entirely been depending on revenue from tourists revenue – about 70 per cent – with the other 30 coming from individual donors and visitors to the Island, majority of whom were foreigners. With the local down, such sources were blocked.

Very desperate to keep their dedicated staff who have selflessly accepted to take a pay cut in these difficult times, the management of the Island recently made an alarm to the public and the Government to assist in donating for the noble cause of preserving the lives of the chimps.

Thanks Dr Sudhir for the helping hand.