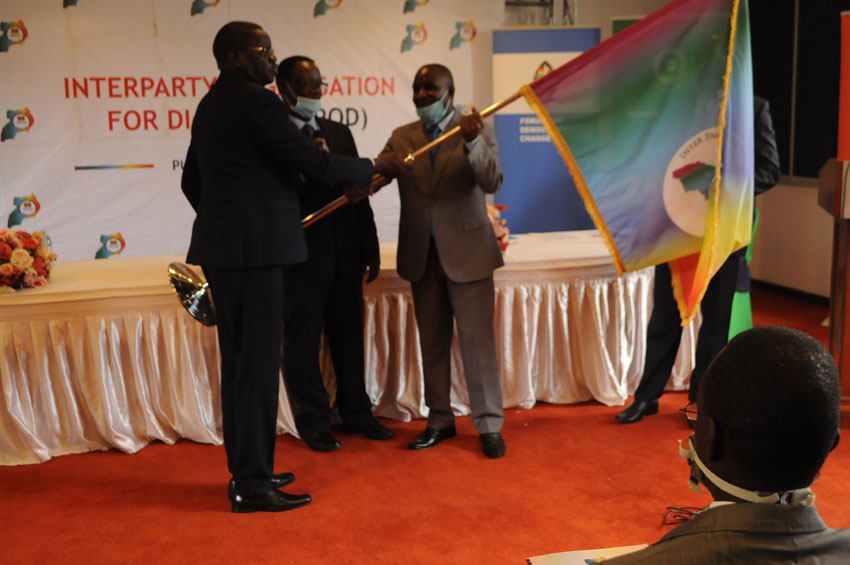 The president general of Justice Forum (JEEMA) Asuman Basalirwa has asked all political parties in the Inter-Party Organisation for Dialogue (IPOD) to stop playing hide and seek and focus on the agenda of the dialogue for a better Uganda.

Basalirwa who was giving his maiden speech after receiving the instrument of power to lead IPOD for the next six months said that ever since the formation of IPOD, there has a been at least a member who proves to be too stubborn than others and does contrary to IPOD’s activities.

“Every time there is a party opposing the ideas of others. For the last nine years, it was Mr Museveni who was opposing the IPOD summits. Now we have had challenges with FDC as far as the summits are concerned. We have never held a summit when all members are present however under JEEMA’s leadership this must stop,” he said on Wednesday during the handover ceremony in Kampala.

As a way of eradicating absenteeism of any party member during the summit, Basalirwa  who is also the Bugiri Municipality MP promised that he is going to reach out to every party leader in person at their respective offices or places of their choice to engage them and sort out the issues.

According to Basalirwa, JEEMA has taken on IPOD leadership in the time when Uganda is facing two challenges that need solutions.The first one is the Covid-19 pandemic and the second one is the issue of the 2021 general elections which are still in probability to take place.

“We take on leadership when the country is facing two challenges where the government or NRM party has used an opportunity of Covid-19 to abuse the rule of law and further abuse the human rights of Ugandans by issuing draconian laws to Ugandans which are unconstitutional instead of a state of emergency,” he said.

On the issue of elections, Asuman said that since they are also stakeholders in the country, President Museveni has to first engage them to come up with a conclusive decision.

“Mr Museveni last time did say that if the pandemic persists we shall not hold elections but under what laws was he using, because constitutionally, not holding elections only occurs when there is a state of emergency. As IPOD we need to sit down and discuss how elections would be held amidst Covid-19 but not only one party,” he said.

While handing over leadership, Forum for Democratic Change (FDC) party president Patrick Amuriat Oboi said that their term has been affected by the Covid-19 pandemic and that is why they didn’t hold any summit that was supposed to take place on May 15, 2020.

“Although we took over the leadership late from the date we were supposed to, we have shown our colleagues of Democratic Party that if it’s time to go you have to go,” said Amuriat.

He added that there is still unturned stone within the IPOD because most of the resolutions that were made in the last summits have not been respected but rather abused.

“Where are the resolutions of the last summit? did they change anything? There is still an unequal field for all opposition political players in Uganda, so as you take on leadership make sure that we turn every stone for the good of Ugandans” he said.

Meanwhile, JEEMA is to lead IPOD from 27th May 2020 up to 27th November 2020 where it will hand over to NRM, each member party leads for six months.

Umeme, Uganda's main electricity distribution company has today unveiled Peter Kaujju as its new head of Communications. "We take this...