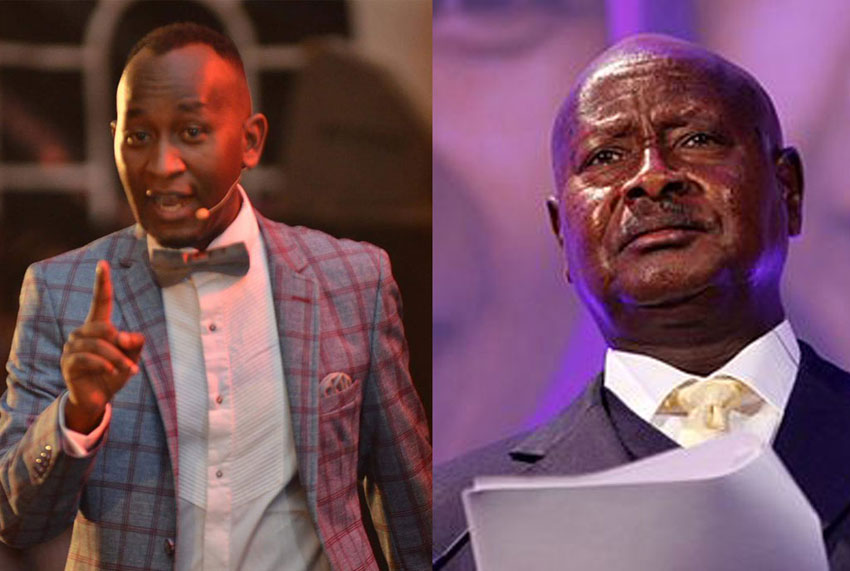 Self styled prophet Elvis Mbonye of Zoe Ministries has sent out what seems like a veiled prophetic warning against President Yoweri Museveni over the continued closure of places of worship even as the head of state announced the easing of the Covid19 lockdown.

Prophet Mbonye’s indirect prophecy of doom for Museveni came after the President had announced the partial reopening of schools, shops, public and private transport but left churches and mosques closed for the next 21 days starting 19th May.

The ‘stylish man of God’ used the scriptures to express his anger at the President’s refusal to open up churches to allow people ask God for mercy and intervention in the face of the Covid menace that has threatened human existence. Only a few leaders like Tanzania’s Pombe Magufuli left churches open as the world declared lockdowns to stop the spread of Covid19.

Without mentioning names, Mbonye seemed to refer to a certain leader who has banned worship and prayers to the book of Daniel 9:27 which spells destruction for leaders who despise the worship of God.

“Then for one seven, he will forge many and strong alliances, but halfway through the seven he will banish worship and prayers. At the place of worship, a desecrating obscenity will be set up and remain until finally the desecrator himself is decisively destroyed.-Daniel 9:27(MSG).”

Even when he didn’t mention the head of state some of his followers, the remnants, have been interpreting the verse to mean that Museveni’s ban of religious gatherings was an attack on freedom of worship and that the prophet meant that the president could soon get himself into trouble with God who could reject him and throw him out of power.

“Those who continue to mock and to violate the sanctity of the body of Christ will certainly face the consequences!” wrote one of the remnants who goes by the name Pearl Wendy.

Another Mbonye follower under the name ka-Namuddu added: “The prophet sees and knows everything. Whatever the state is planning we know – Whatever is planned against the child of God shall be exposed and stopped. Glory to God.”

Even Mbonye shoe-kisser and Watchman Ministries pastor Joseph Kabuleta seemed to have been rejoicing. “Did you hear that?” he asked nobody in particular.

The wealth of Africa is its natural resources, so they say. However, every development scholar would tell you, true wealth...