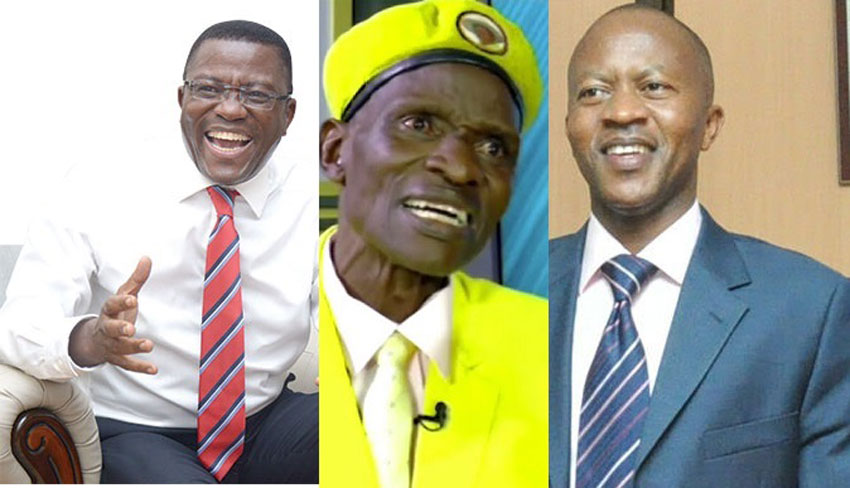 In his interview with NTV Uganda’s On the Spot show host Patrick Kamara, Mayiga revealed that there are three groups of people currently behind the attacks.

“The people who throw dirt at me are not many, they are few but they like to talk all the time. There are also people who do not want to see progress like the one we have made at Mengo, it’s modest but it creates an impact. Criminals who don’t work are bribed to abuse me. I feel sorry for these criminals. I would be concerned if the majority of people were unhappy with me and my colleagues,” said Mayiga.

According to the Katikkiro, one of those groups consists of the talkatives. Mirundi and Gashumba with no doubt would be the ring leaders in this category. Mayiga would have been thinking about these two motor-mouthed people while answering this question which he expected when he agreed to this interview. When he made his state of the kingdom address as he marked seven years since he took office as Katikkiro, Mayiga made a veiled attack at Mirundi and Gashumba who have on several occasions accused him of fraud at Mengo.

“Some of these people are usually arrested for being con artists. They have no known jobs apart from conning people. Others are drunkards. We are here talking but they are already drunk. By midmorning, they have already done a crate of beer and are opening another one. I feel pity for television stations that employ them. There also those with pseudo names on Facebook and Twitter. Don’t pay attention to anything they say. Those are not people you should pay attention to. Find critics worth their name,” said Mayiga.

Mirundi and Gashumba hit back at the Katikkiro and vowed to expose more rot at Mengo which they claimed was as a result of Mayiga’s greed and incompetence. Mirundi said Mayiga was almost being kicked out and was desperate to find someone to blame.

“Every Katikkiro that comes closer to being fired starts ranting and lamenting. Mulika and JB Walusimbi did the same,” Mirundi said. “We are asking him about the ‘masiro’ money (Kasubi tombs) and he calls us drunkards. For the first time, the rain is hitting the Ssekabakas (departed kings) because of Mayiga. Why unroof the masiro when you don’t have the money?”

Gashumba, who had earlier threatened to blast Mayiga in his social media live broadcasts has reportedly ceased fire after talks brokered by his allies and those close to Mengo.

The second category of people that Mayiga hinted at in his Thursday interview are those don’t like to see the progress he has helped Buganda achieve in his reign as Prime Minister. While these could merely be haters, envious of a vocal middle-aged man who has been the voice of the Kingdom for seven years, Tamale Mirundi one of his enemies would casually brand members of this group the mafia. Are these people from Buganda Kingdom, other kingdoms or the central government? Do they want the Katikkiro to keep quiet about Mengo’s demand for its properties or federal which he has said is possible in his lifetime and is the best way to run a culturally diverse country like Uganda? Some analysts are also arguing that this group comprises of those who believe in the rumor that Mayiga might eat big in President Yoweri Museveni’s government once he leaves office as Katikkiro of Buganda. They argue that as a way of pleasing Buganda royalists and the Buganda ethnic group at large, Mayiga would be the best replacement for fellow Muganda Vice President Edward Kiwanuka Ssekandi.

The third group are those used by the talkative and the haters (mafia). These are simply social media influencers and young radio and television callers or panelists who simply spread the gospel of criticising Mayiga in his personal capacity, and in his official capacity as a representative of the Kabaka. The Katikkiro seems aware of these people, and knows who to blast and who to keep quiet about in the interest of himself as a person and the interests of the Kingdom of Buganda, its relationship with its people, Ugandans and the central government.

Singer John Blaq speaks out on bitter row with management