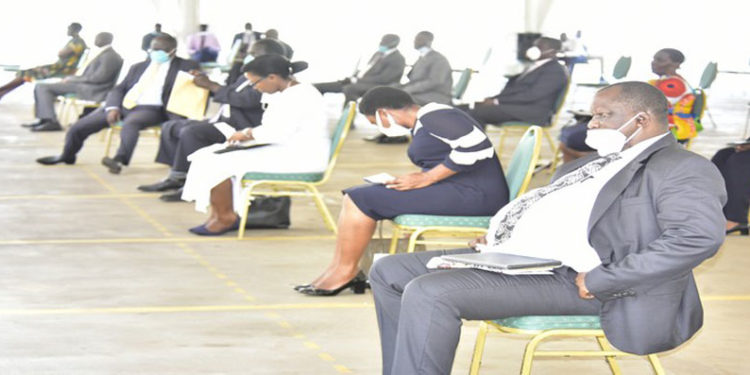 Members of Parliament are concerned about the delayed roll out of the national rural electrification project following approval of a loan from EXIM Bank.

Bududa District Woman MP, Justine Khainza said that the loan amounting to US$212.6 million is meant to have electricity extended to 287 sub-counties across the country. The project was supposed to be implemented by Tebian Electric Apparatus (TBEA) Company Limited.

“Of late, the media has been awash with allegations of financial loss under the Rural Electrocution Agency (REA) and in particular, pertaining to these sub-county projects.,” said Khainza.

James Waluswaka (NRM, Bunyole West) said the loan was passed with a promise to Ugandans that all sub-counties would be lit by election time.

“They had promised to set up power in Butaleja by March 2020 but up to now, nothing has taken place,” said Waluswaka.

Bugabula South MP, Hon. Henry Kibalya presented to the House a Memorandum of Understating (MOU) which he said was causing the delay in implementing the power projects.

Kibalya said there was a misunderstanding between the REA Executive Director Godfrey Turyahikayo and the technical officer handling the project, owing to discrepancies in project implementation directives.

“The Executive Director agreed with the contractor that the low voltage scope in kilometers would cover 1,827km but the technical person called John Turyagyenda recommended 5,921km,” said Kibalya.

Kibalya added that Turyahikayo had negotiated for the coverage of 287 sub-counties but Turyagyenda went ahead to negotiate for coverage of 610 sub-counties, saying that, “this caused a lot of in-fighting and eventually the MOU could not be effected which has made we the beneficiaries lose out.”

Speaker Rebecca Kadaga directed the Ministry of Energy and Mineral Development to present a report to the House on the delays.

“This TBEA loan was very exciting for all of us because we knew many of the sub-counties were going to be covered but it is not moving well. It is a matter of grave concern,” said Kadaga.

State Minister of Mineral Development, Sarah Opendi said TBEA Co. Ltd began executing the project in October 2019 but there was sluggishness in implementation citing management issues that have affected the project.