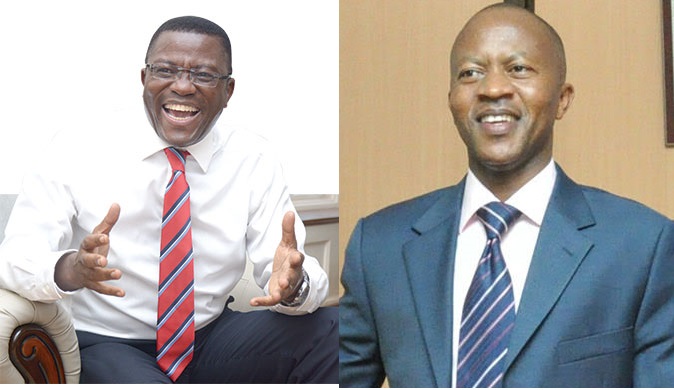 This was revealed by Masaka District Chairperson Jude Mbabali on Tuesday.

He said, ” After numerous requests from various stakeholders in Greater Masaka, where both Owek Katikkiro Charles Peter Mayiga and Mr Frank Gashumba hail from, appealing to me to reach out to Mr Frank Gashumba to cease fire against the Katikkiro of Buganda.

I have this morning reached out to him and explained why he has to cease fire, he also explained to me his side of the story but agreed to cease fire. He has assured the people of Greater Masaka and Buganda that in the interest of unity in Buganda he will respect the ceasefire.”

Mbabali who is also the Chairman of Greater Masaka District chairpersons further appealed to people who have been spicing up the controversy to stop for the good of Buganda kingdom.

The battle of words started a few days ago when Katikkiro Mayiga told Baganda to shun drunkards and conmen attacking him using the media.

“Some of these people are usually arrested for being con artists. They have no known jobs apart from conning people. Others are drunkards. We are here talking but they are already drunk. By midmorning, they have already done a crate of beer and are opening another one. I feel pity for television stations that employ them. There also those with pseudo names on Facebook and Twitter. Don’t pay attention to anything they say,” said Mayiga. “Those are not people you should pay attention to. Find critics worth their name.”

Although the Katikkiro didn’t mention any names, social media critics rushed to fit Gashumba and Tamale Mirundi into the speech, and the two controversial figures rose up in arms, firing back at the Mayiga.

Gashumba had since opened up a social media war on Mayiga whom he accuses of misappropriating Kingdom funds, among other allegations.

“Charles Peter Mayiga is not even worth being the Katikkiro of Buganda. He is just money minded. With all the money collected through Tofaari and the billions got from government, he failed to complete the Masiro. By the time he leaves that position, he would have failed the Kabaka in many areas. In Buganda it’s only the king that I cannot scrutinize. The rest I can like Mayiga because he is a Mukopi like me.”