Museveni should apologise to us- MPs

by Catherine Apolot
in News, Politics
6 0 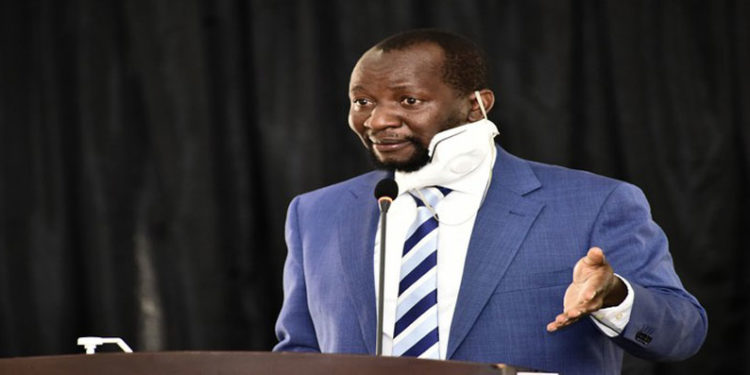 A section of MPs have asked Cabinet to apologise to Parliament over claims that President Museveni used one of his Covid19 addresses to undermine the House.

“The head of state was inciting the public against MPs…why are we being treated like we have no stake in this country? This level of belittling institutions of state and MPs must stop,” said Ssemujju.

He added, “The executive must come here and apologise to Parliament over what happened last week”.

Odonga Otto claimed that security officers deployed to implement the lockdown measures announced by government are going without allowances despite appropriation for the same by Parliament.

He criticized President Museveni’s address that he said cast the House in bad light.

Speaker Rebecca Kadaga, who chaired proceedings, said a debate on the issue couldn’t be entertained at the time owing to earlier scheduled business, but said Parliament will have an opportunity to sufficiently debate the issues.
In an address last week, President Museveni criticized MPs for a payout of Shs20 million meant to facilitate Covid19 activities in their constituencies. He advised Members to return the money to their respective district taskforces.

The fund has since become a matter of sustained public contention.

“The Minister should come here on Thursday to explain to the House the situation of Hon Zaake; Hon Zaake has been arrested on four occasions and on all these occasions he has been badly beaten,” she said.

MP Theodore Ssekikubo (Lwemiyaga) joined in, blaming government for what he said is an elaborate ploy to weaken the Legislature.

“Under no circumstances should an MP be tortured, brutalized for only one thing-that he was distributing food. Today it is Hon Zaake…if it is being done to an MP under the pretext of a lockdown, how about ordinary Ugandans,” he said.

Nyakecho was arrested together with her brother and Personal Assistant, in a crackdown that targeted people allied to jailed former Security Minister Lt Gen Tumukunde.

Speaker Kadaga asked government to provide a comprehensive statement to Parliament on Thursday.