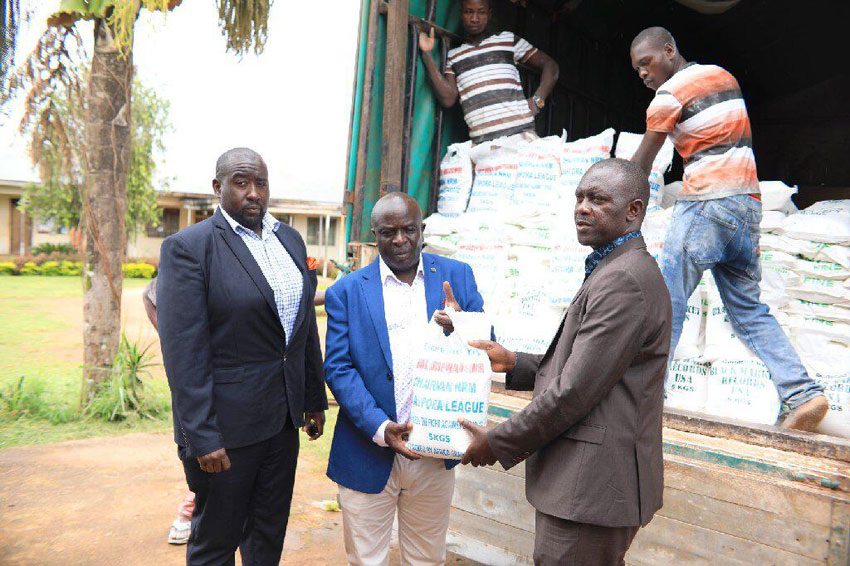 Residents of Luwero district have received food relief of seven tonnes of maize flour amid the current COVID-19 lockdown in Uganda.

While receiving the package, Luwero LCV Chairman Ronald Ndawula commended the two sons of Luwero;- Walusimbi and Kigozi for not forgetting their homeland and attracting friends like Cedric into giving back to their community in these very trying moments.

“A friend in need is a friend indeed. In these times when people are home 24/7 due to the ongoing lockdown it is only worthwhile for us to respond to H.E. President Museveni’s call to help feed our brothers and sisters who are in need.” Said Walusimbi.

The food which was taken to the Luwero district COVID-19 task force comes in at a time when people are sleeping on empty stomachs and stranded not sure when the lock-down might end so that they go back to normal business.

Another 200 bags of flour were donated to the religious groups present each receiving 100 bags.

The Kibuli Sect District Kadhi of Luwero Sheikh Mulindwa Ramadhan appreciated the trio for the big hearts and help extended to the Muslims of Luwero during Ramadhan which came at a very difficult time.

Kigozi said, “ If a man made candle can share its light without losing itself, why not us humans? The real contentment comes from knowing we have positively contributed to bettering another human’s life. Thus is the time that we are needed the most to pay forward the acts of kindness we have received in the past. I trust that our country will rise stronger and more united at the end of this lock-down that has seen families bond.”

The trio revealed their next move will be to reach out to the people of Bududa who have been affected by natural hazards on several occasions.

I earn more than you! NTV’s Crysto Panda fires back at Sheila Gashumba over pay rant

5 ways to move on from an ex you still love

5 ways to move on from an ex you still love