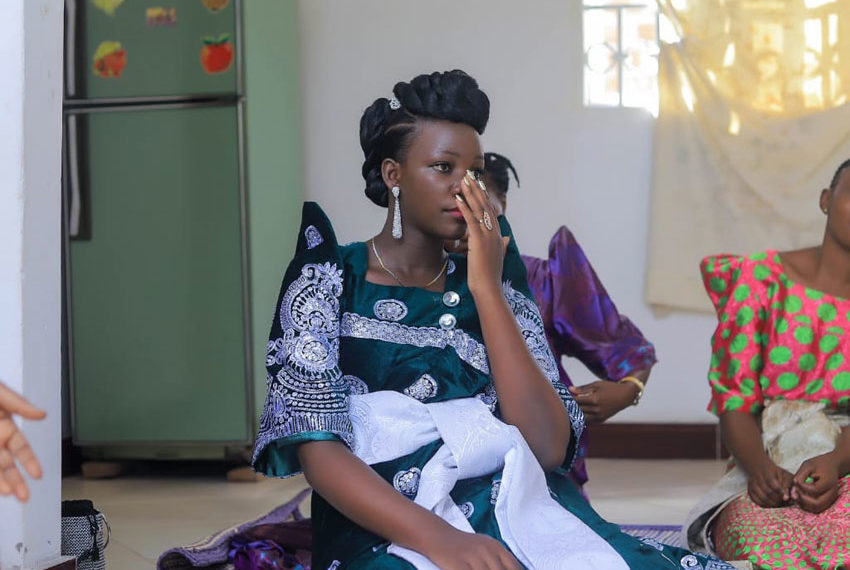 In a bizarre revelation, medics at Mulago national referral Hospital’s annex at Kiruddu in Makindye Division are in trouble after being accused of allegedly killing a patient whom they had wrongly suspected of having coronavirus.

It’s alleged that Ms Nakanyiga Kulsum 23, received some breathing complications on March 31, six days after successfully delivering her first born child at Mulago Hospital Kawempe prompting relatives to rush her to a nearby clinic in Makindye Salama road, where they were advised to proceed to Kiruddu for specialised medical attention.

When they went to Kiruddu on April 1, the patient’s situation worsened as she could be seen struggling to breath which prompted her admission to the emergency wing of the hospital according to Ms Sharon Katushabe, a  sister to the deceased.

Following exposure to the heavily blowing wind on their way to the facility, and possible fatigue, she started coughing uncontrollably leading to a flow of blood from her nose and mouth since she had just given birth.

During that time, other patients in the treatment room were slowly displaced until when there was only Nakanyiga and her two attendants. This created suspicion among family, prompting them to contact Ministry of Health Officials for guidance, who asked them to engage the Hospital staff to ascertain the cause of the breathing complications.

“When all the beds in the treatment room were pulled away, we got scared and contacted the healthy ministry for guidance. We were advised to talk to the medical staff to handle the situation well,” Katushabe told watchdog in a telephone conversation on April 30.

Since the day they arrived, the deceased did not receive any kind of medical attention despite the medics accepting that she was in an emergency state.

In the meantime, Nakanyiga’s condition continued deteriorating as she could be seen gasping for air.

Having spent two painful days at the facility with unanswered pleas for help from the medical staff, Katushabe decided to go home to have some rest and also tend to the patient’s new born baby that had been left at home.

Katushabe left the patient at the hospital in the care of her husband Mr Kayongo Vincent.

At night however, Nakanyiga’s condition worsened. Her asthmatic breathing was more worrying. Watching desperately as life slowly migrated out of his wife’s now weak body, Kayongo kept reminding every medic in sight of how Nakanyiga could only be saved if attended to but to no avail.

” I pleaded to the medics that night and none of them seemed to care. It was a desperate moment looking at my wife sliding into death with no one to help,” Kayongo speaks with tears in his eyes.

The following morning, Katushabe who badly needed to save her ailing sister from the jaws of death was convinced beyond any doubts that there was no life for her sister at Kiruddu. The troublesome calls from her brother in-law from the Hospital a night before had made her sleeplessly contemplate all possibilities to secure the sick young mother’s life.

That morning, she passed by Kiruddu police post to inquire if she had the right to transfer her patient from the facility to another Hospital even if not directed by the Hospital authorities to which police said it was okay.

At the Hospital, she, along with Kayongo wheeled their dear one into a waiting vehicle before they were prevented by a heavy security deployment of about 6 men. The medics tried to assure them that all would be alright as Katushabe and Kayongo insisted they needed to take the patient away after all earlier pleas for assistance at the facility had been futile.

During the scuffle, Nakanyiga whose painful creaking breathing could all along be heard out from her failing lungs, went mute! She was breathing no more. The medics to whom they had gone to secure life for their loved one had let them down.

“Panic ensued as medics moved to and from as shouts of ” don’t let her die. Try to wake her up,” could be heard among the medics in medical aprons.

“All along along, we were stone dead. We looked on as though it all didn’t concern us. As if we didn’t care if she dies or not. Fear and shock had taken a dangerous toll on us.” Katushabe reminisces.

Effective as never before, Doctors finally succeeded in waking Nakanyiga from the dead. She was immediately rushed to the ICU and put on life support. She stabilised and was restored back to her original lone treatment room.

Katushabe narrated that her hope was short lived when medics at the facility continued avoiding her sister after she left the ICU. None was ready to attend to her. It seems they undoubtedly believed she had a very deadly contagious disease they feared to contract.

Later that day, a strange face came to examine Nakanyiga. The eyes, the stomach, the temperature and then pushed his medical hands in between a nearly motionless Nakanyiga before he gave his verdict that she lacked blood.

This bizarre announcement invited suspicion from the attendants who decided to capture this particular medic on Camera. He was called Dr. Baluku Muhame, going by what his name tag bore.

Family doubted the intention of a blood transfusion for Nakanyiga right from the start and were keenly observant from that time on. They suspected there could be a plot against their patient.

As soon as blood pipes were infused in Nakanyiga’s frail body, her situation changed from worse to worst. Blood started flowing from her body up through the tubes into the blood sachet. It was very evident that something was wrong as Nakanyiga desperately wailed for her dear life! The attendants cried for mercy from the medics on duty before they disappeared one after another until there was none left for them to run to for the rescue of their patient who appeared to be heading for death.

” Every medical staff we encountered would tell us did not work in that particular ward and then left us.

After hours of desperation, as the patient neared towards the death gates, a kind medical intern came to the rescue of Nakanyiga, trying to fix the transfusion that had evidently gone bad. This however unsteady worsened the situation as the prospective young medic opened the patient’s main artery that made her bleed until there was no trace of life in her body….. To be continued.