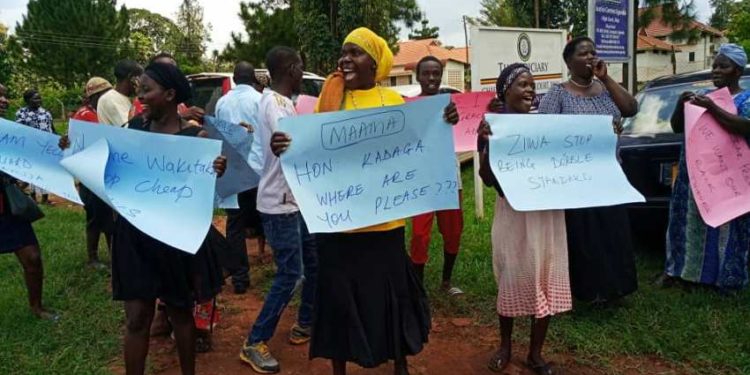 Crowds of Jinja residents on Saturday stormed the gate of the Magistrate court asking for the release of the Residence District Commissioner (RDC) of Jinja, Eric Sakwa who was remanded on Friday.

Women and men held placards praising Sakwa as the only RDC who has been performing ever since Museveni made the reshuffle. Other placards asked for the involvement of the Speaker of Parliament Rebecca Kadaga,  ‘Mama Kadaga where are you?’ while others blamed some Jinja leaders for double standards.

Sakwa was arrested and remanded to Kirinya prisons on Friday by Jinja Grade one Magistrate Happy Ann Kobusingye. He was charged with several counts including; manslaughter, causing the death of one Isanga Charles, robbery and malicious damage of property.

According to the officer in charge of preferring charges D/SP Swaliki Dauda, Sakwa together with Bazimbyewa Bumali alias Chris Umar Dindodi, Simba Mohammed Alia media and others still at large between the 22nd of March 2020 and 17th of April 2020 at Lwanda village in Jinja district unlawfully arrested and caused the death of Isanga.

The charge sheet also shows that on the same date, Sakwa and the colleagues mentioned above at Lwanda village in Jinja stole cash Shs 80,000, three crates of beer, eight trays of eggs, sachets of Empire Drinks and Soda all valued at approximately Shs 429,000. These belonged to the deceased Isanga who was beaten violently. They are also accused of malicious damage of glass counter, the property that belongs to Isanga.

Although he was remanded till 13th May 2020, trusted sources alleged that Sakwa was yesterday night driven back to his home by security operatives at around 8 pm.

Despite the demonstration at the court, local sources accuse Sakwa and his colleagues of taking part in most of the land wrangles, theft and unlawful acquisition of army uniforms.

“He has been frequently seen in security operatives uniforms yet he’s not a security officer,” said one of the local leader.

Prof. Waswa Balunywa: Nothing Freezes in Place: All Organizations Must Change with the Coronavirus Pandemic