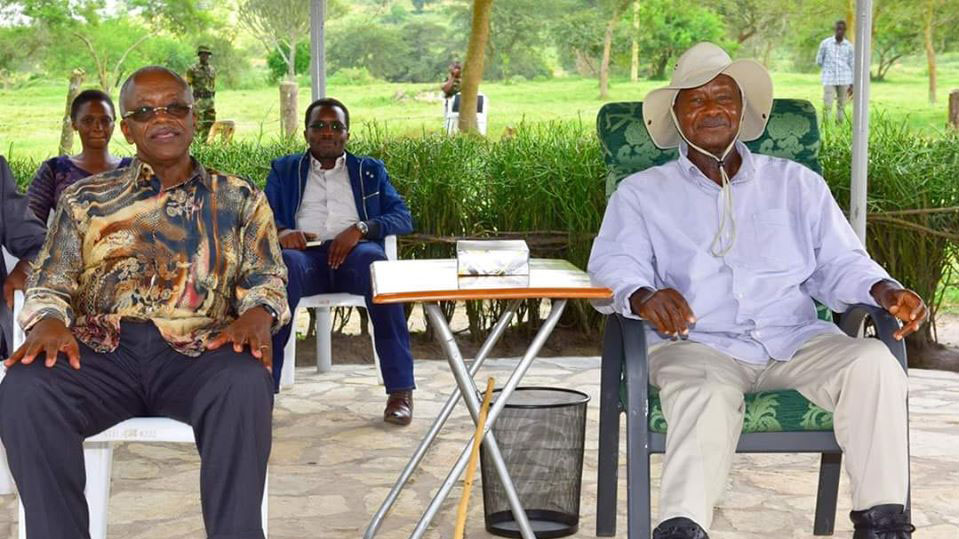 Museveni was however able to consolidate his party’s supremacy, giving his defecting former ally a political lesson of a life time by defeating him with an unimaginable margin as he cruised to his record fifth Presidential victory that would guarantee him 35 years of presidency.

Ever since information of the two holding talks at the President’s country farm in Kisozi, Gomba late last year, reports that they have since made peace have been making rounds with others further emphasising that talks for Mbabazi’s maiden return to his former marriage with Museveni were under way.

While attending the UPDF’s Tarahe sita celebrations in Nakaseke in February this year, Mbabazi received a heroic welcome from the men and women in uniform, with General Salim Saleh among the notable officers to herald the anticipated new day for Mbabazi as he was the one to first salute the respected Museveni long time ally before the rest of the officers and other dignitaries including Museveni Ministers followed suit.

The magnificent spectacle drew much political excitement making many pundits to allege that the man from Kigezi had bounced back into the queue of succession for Musevrni’s post.

Below we dig into why the former party Secretary General’s return to Government may have little to offer for the NRM party which is in dire need for face-lifting as it’s crop of 1986 youthful cadres have advanced towards their political retirement.

Mbabazi’s best years of political profitability are way behind him. As observed earlier, the dominance of aged leaders in the ranks of the party points towards the need for the empowerment of young and energetic leaders with the capacity to ensure political continuity. At 71 years of age, it would be asking Mbabazi too much if he is the one to lead or promote mobilisation for the party. At a time when young people like Frank Tumwebaze, Nakiwala Kiyingi, Muhoozi among others should be entrusted with holding the party at their shoulders, more power to Mbabazi would be an obstruction for the young blood in the party. In this very regard, it would serve NRM best if Mbabazi mends fences with his old friend and return to the party but just in an advisory capacity so he paves way for the people whose leadership capabilities are bound to benefit the NRM for some decades to come.

A return for Mbabazi and his rumoured reward with an important ministerial position in government would serve as a bad example to the Party’s loyal cadres who may feel unappreciated. Having protested the 2015 party position to have President Museveni run as a sole candidate, his miserable defeat had proved Museveni’s invincibility and whoever could have had intent to rebel would have to think twice.

If Mbabazi, the biggest NRM defector gets rewarded on return, it could serve as a pointer that the party leadership rewards dissent more than loyalty. As such, the good record of discipline in the party may drastically whither leading to internal party instability.

It’s also likely to distort the balance of power in the party which had been restored, years after Mbabazi had left. When Mbabazi broke ranks with the party he had helped build in 2005, it was evident a lot had to be done to bring it back on the course of political balance. Having occupied two of the most important positions in the party and NRM, his defection meant panic structural changes in the party in such a short time with elections set for less than a year. Subsequently, Ruhakana Ruganda and Kasule Lumumba were appointed as Prime Minister and party Secretary General respectively.

As expected, it did not cost Rugunda much time to settle in due to a wealth of experience he had enjoyed at the highest level. For Kasule however, it was unsurprisingly not going to be a simple task. It took her a lot longer to stamp her authority over the big wigs in the Country’s most successful political organisation. She has been fiercely fought by some party radicals who felt such an important position for a woman was just a joke. After years of flexing with the likes of Party chairman of electoral commission Tanga Odoi , her Deputy Richard Tadwong, Kasule seems to have fully established herself as the stone characterized Secretary General that befits the party in power. It would be a disservice to the party to disturb the balance, peace and tranquility that has since returned to NRM by returning Mbabazi as a major decision maker.

The former premier might also wield a whip of vengeance upon those within NRM whose efforts in fighting his 2016 Presidential bid made life difficult for him. It ought to be noted that Mbabazi’s Presidential bid threw the NRM’s camp into disarray, making Museveni to devise hasty desperate measures to mitigate the foreseeable damage that was bound to befall the party deserted by its second most powerful resource after Museveni himself.

In trying to tame his long time ally’s souring popularity,Museveni needed to use the people close to Mbabazi and unsurprisingly, these were the very people who were in the ruling party’s hierarchy. Those upon whom Mbabazi’s venomous proboscis would most likely land onto upon his return is Party Secretary General Justin Kasule Lumumba.

Inside sources intimated to us that Kasule was arguably one of her predecessor’s closest confidants. She was widely accused of bad mouthing Mbabazi before Museveni which subsequently resulted in the former being dropped from the Museveni cabinet in 2014.

Another person whom Mbabazi might live never to forgive is Minister Evelyn Anite. Despite her prior close relationship with the then party Secretary General, Anite openly disowned Mbabazi when she went on her knees to seek Museveni’s acceptance to stand as the party sole candidate for the forthcoming general elections. She allegedly presented Museveni with the entire Mbabazi chess board onto which he planned for his Presidential bid.

Another fierce Mbabazi critic within the party ranks is current Minister for the Presidency Hon. Esther Mbayo. She was so instrumental in dismantling his cells within the party. No wonder she was rewarded with the important ministry charged with politically protecting the President.

It’s also reported that Presidential aspirant Gen Henry Tumukunde driven out of his comfort zone with in the ruling party after the news of Mbabazi’s eminent return gained momentum. Sources within government intimated to us that Tumukunde was too worried to face off with the former premier whom he had fiercely fought in 2016 when he had been appointed by the president to thwart his Presidential progress. Left with no options , Tumukunde decided to find a comfortable place where he would enjoy a life free from the strong man from Kigezi. As such he chose the opposition to be his alternative home.

It’s therefore not surprising that all the people mentioned above were rewarded with appointment to juicy cabinet positions with Kasule standing out in a direct revenge when she took over as Party Secretary General, succeeding Mbabazi – the man she had helped to bring down.

The fact that Mbabazi had served in almost all the most important ministerial positions prior to his defection leaves Museveni in a bad negotiating position in case of any such talks. Having served as Minister of defence, Foreign Affairs, Presidency, Justice and Constitutional Affairs, Attorney General,Prime Minister among others, leaves no many exciting offers for Mbabazi to take on unless he is to Deputise Museveni, replacing a less ambitious Ssekandi to whom Museveni succession talks would be as useless as a bottle of whiskey in Archbishop Kazimba’s office.

But with Mbabazi’s publicly known appetite for power, a position as sensitive as VP would automatically spell doom for the NRM party. It would expose Museveni to the risk of a divided Party as many within would most likely interprete it as an endorsement for Mbabazi as the next President. As such, a succession war within the party will most certainly erupt to the detriment of the unification efforts into which the party leadership has invested heavily in the post Mbabazi NRM era headed by SG Kasule Lumumba.

It therefore remains to be seen whether Museveni, whose actions in the most recent past clearly meant he never meant Mbabazi to be the man to run the affairs of the State after him, will indeed recall the aging former ally to come and help fix almost nothing in the party. It would thus only be prudent to install Mbabazi in an advisory role than active an political office which would go a long way towards facilitating a generationally favourable transition.

May 1 2004: Attorney General and, Minister of Justice and Constitutional Affairs.

February 2016: Museveni and Mbabazi meet at the Serena Conference Centre for a televised presidential debate.

August 2018: Hosts Museveni at his home in Kololo for his daughter’s traditional marriage ceremony.

November 2019: Museveni appoints Mbabazi daughter to the Board of National Water and Sewerage Corporation.

Attended the UPDF February Tarahesita celebrations in Nakaseke District this year, ripening the allegations that he was slighted for an eagerly anticipated maiden return to the ruling establishment.