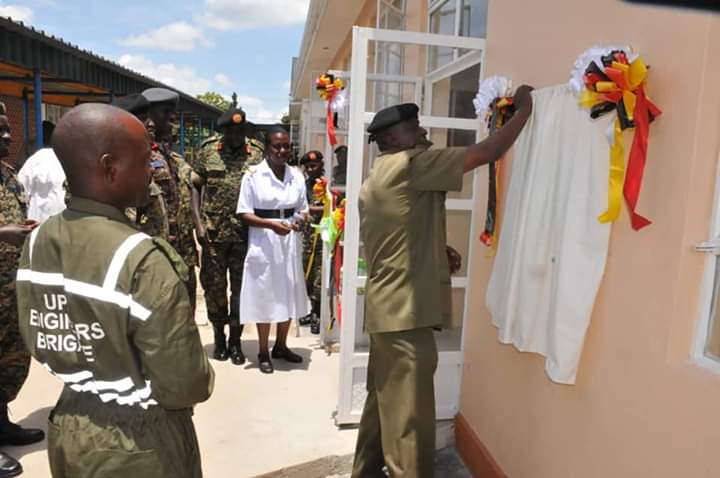 The Camp Commandant of General headquarters Bombo Maj Gen Joram Kakari Tumwine has officiated at the commissioning of a maternity ward in General Miltary hospital (GMH) Bombo in Luweero District.

The Commandant expressed gratitude to wazalendo Sacco for having put General Military Hospital on its priority list to expand and construct the maternity ward in the hospital.

This will enhance the health standards for the soldiers and the local community.

The Commandant urged the end users to make good use of the facility to serve the purpose for long.

He reminded the public to abide by the health precautions being put into place by the ministry of health. He reminded the to also adopt the Presidential directives to avert the serious epidemic virus commonly known as CODIV 19 which is a very serious concern worldwide.

“The 25 additional beds at the maternity will promote face value at the facility bringing in more mothers which will require more facilities in the near future,” said Dr. Ochen.

He thanked WASSACO for taking the initiative and commitment to support GMH in the construction of the maternity ward.

The head of department Col Dr Nobert Kabugo said, the former maternity ward was handling 15 to 25 mothers who are ready to give birth using 15 beds but the facility is now having 30 beds capacity to handle 30 mothers.

“I appreciate the efforts put in place by Wazalendo Sacco for financing and overseeing the works of the project” said Col Dr Kabugo.

Col Chris Ogumeraki the vice Chairman Board of directors Wazalendo Sacco who represented the deputy CDF Lt Gen Wilson Mbadi said that soldiers’ welfare does not only depend on credit but also on other social amenities like the medical ward.

The Chief Executive Officer (CEO) Col Joseph Onata said that the project started in 2018 as a concern from the community. Due to the appreciation of the wazalendo Sacco shares, the project cost 154.9 million Uganda shillings.

He applauded wazalendo members for mobilizing the money in form of savings to improve on their welfare and to support more projects of the kind.