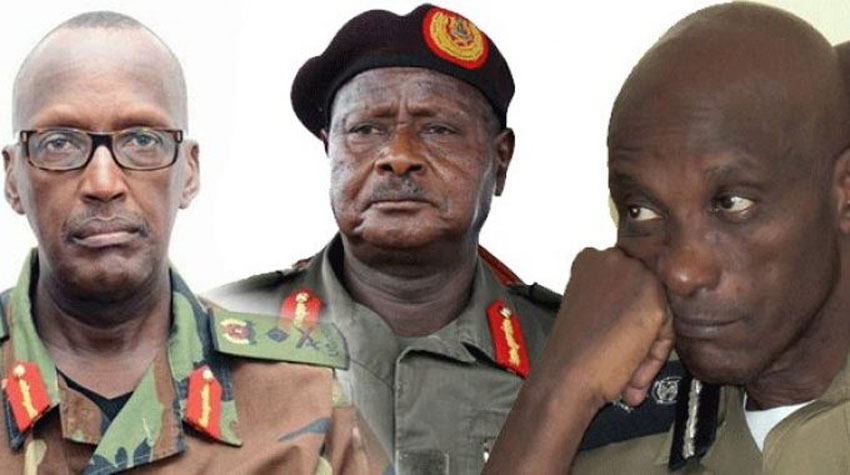 Following the axing of former Police Chief General Kale Kayihura Karekyezi in March 2018, and his subsequent arrest and detention,many people argued that he had plotted to overthrow his boss and that so was the reason he was relieved of his duties as police chief after nearly one and half a decade at the helm of the force.

Most political analysts had vehemently connected the crime preventer project to the former Museveni strongman’s troubles,with some alleging that he had intended to use the force to start a rebellion that would subsequently topple the Kampala regime.

This argument however did and doesn’t make any sense since the regime’s strong and sufficient spy network is not one that would have let any subversions by the police chief go undetected especially when it involved the recruitment of a force of over 10 million people.

In fact President Museveni himself watered down this narrative at the March 28th, 2018 meet with crime preventers at Lugogo where he praised the former general as a loyal cadre of the regime’s National Resistance Movement and thanked him for implementing the project which was an initiative of the party and that the police chief was just an implementer.

The then national coordinator of the group Mr Blaise Kamugisha used the occasion to announce that the role of the force was to protect the President and for him they could even kill. How then did the President chose to meet with the force that general Kayihura had mobilised to usurp power from him? It raises questions and doubts over any claims that link the crime preventers and their godfather Kayihura to any acts that would be unfriendly to General Museveni.

Did the president really risk to meet with the rebels in the number of over 3000 people and even announce he would join them into the national army as a reserve force? Isn’t that laughable?

Reliably,the crime preventer project was an initiative by Kayihura to use his position to mobilise for his master’s reelection in 2016. He had used a similar approach in the 2011 general elections and proved to have been a success with the recruitment of the Special Police Constables who were later absorbed into the police force.

In 2015, General Kayihura recruited over ten million Ugandans as vigilantes into a community policing force called the crime preventers. While as it was meant to assist the police in combating crime, the hidden motive was to give the incumbent a smooth sailing into the most coveted office of the presidency in 2016 general elections.

In fact an alliance of five human rights groups- in uganda – amnesty international, human rights watch, human rights network Uganda, chapter four Uganda, and foundation for human rights initiative called for the suspension of the force for being partisan and hostile to the people.

Those who were recruited into the force were practically indoctrinated to vote only the regime at all levels and those who were found hard to change were tactically deployed in areas where they wouldn’t be able to vote. This scored highly at the polls and General Kayihura’s favor multiplied before his boss and this marked the beginning of his troubles.

Many in the regime inner circles started seeing the mighty general with envy and suspicion .His favours from the president and his ever growing might threatened many especially in the line of succession. Those who felt threatened needed to come up with a plan that would not only discredit the General before his master but also before the public . This group then had to identify a formidable force to combat the general’s influence and that’s when they zeroed down on Gen Henry Tumukunde due to his known rivalry with the then police chief coupled with his long service in the national intelligence. His role was not going to be convincing the President that Kayihura was not a formidable ally any longer but to open his eyes to the looming threat likely to be ushered in by the growing strength of Gen. Kayihura and that keeping him under check was just very necessary then than ever before.

General Tumukunde was recommended by the anti-Kayihura forces with in the Museveni circles and he was subsquently appointed security minister in June 2016.

The biggest task that laid ahead of the new security minister was to find convincing evidence to make the President believe that Gen Kayihura was in deed a threat to his incumbency . He had a force of over ten million civilians only loyal to him ,with about one hundred thousand serving and retired police officers let alone his ex combatants in the army.

The crime preventer project itself was to be used to bring the mighty general to his knees. It ought to be noted that the entire reign of general Kayihura as a police chief was characterised by gross abuse of human rights which distanced him from the common people especially those in the opposition.

This was the only price to keep his master in office as he took office at a time when the dissenting forces against the regime were at the peak and thus needed a radical police chief to save the regime that desperately needed a miracle to have a new breath.

He employed the most radical and cruel tools at his disposal just to make sure the regime was safe. This made the work of his nemesis an easy one in discrediting him and making him a liability to the President who would consequently drop him and replace him with a politically less ambitious person.

In trying to uproot him from the public, a number of avenues were explored among which included the use of media. Here the problem was that it was hard since the strong General had much influence and that no media house would dare to initiate a fight against him. General Tumukunde spoke to his spy chief Kaka Bagyenda who was once his Junior and asked him for assistance. This is when a popular blogger from Europe along with others were recruited to spearhead a propaganda fight that would awaken the public against Gen Kayihura such that they would now attack him from his weakest point.

This was the climax of the battle and here Museveni moved quickly to save the image of his government as well as saving his most trusted general. The later was briefed about the only two available bitter options for him. He would either be dropped and and tried locally or risk to be arrested and tried by the international criminal court.

Kayihura painfully chose to be dropped and tried locally but said that he wouldn’t be happy appearing to have lost that battle with his nemesis General Henry Tumukunde. He thus asked his master for a last favor and that was to be dropped a long with General Tumukunde and this offer was given to him.

Kayihura was later arrested briefly and charged with misuse of office and the return of Rwandan refugees to Rwanda contrary to international Refugee rights. He was later released and has since been withdrawn from public life.

Tumukunde on the other hand is currently battling with treason charges in Luzira prison.

IGG sweeps aside investigations into Bagyenda’s Billions, now wants her to keep in office

This is the worst kept secret separating successful from failed businesses