by watchdog
in National, News, Politics
5 1 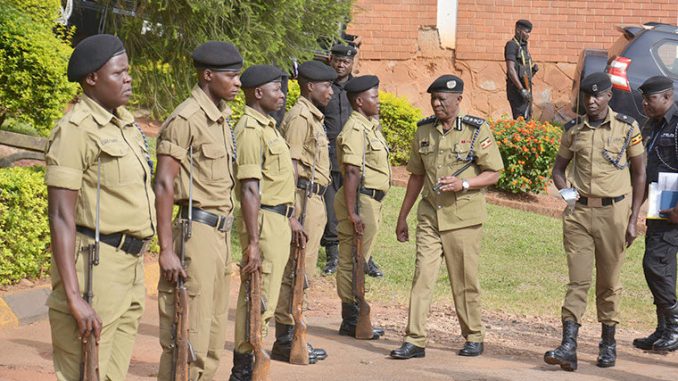 News of the withdrawal of the 261 police officers from all KCCA installations and homes of directors started circulating on Sunday night until was confirmed on Monday afternoon by police spokesperson, Fred Enanga.

He told journalists at the weekly police briefing that the IGP wrote to the acting KCCA executive director, Andrew Kitaka, a month ago advising him to devise means of guarding major installations, saying police officers attached to the Authority would be withdrawn in a month’s time.

He explained that the force was facing manpower shortages in Kampala and wanted its personnel for deployment at vital places such as stations.

According to Enanga, the IGP clearly indicated in his letter that police would recall 261 officers from KCCA on February 27, 2020 but there was no response from the Authority until the deadline elapsed on Thursday last week.

He explains that this prompted Ochola to order the Kampala Metropolitan Police (KMP) leadership to ensure all police officers deployed for guard duties at the homes of KCCA directors and other installations are withdrawn.

Ochola has only left guards attached to Kitaka, the deputy executive director Dr Judith Tukahirwa Tumusiime, Lord Mayor Erias Lukwago and a few guarding City Hall. KCCA spokesperson Peter Kaujju and Kampala mayor Lukwago couldn’t be reached for comment as they could neither pick nor return calls from our reporter.

Kampala Metropolitan area that covers Kampala City, Wakiso and Mukono districts takes nearly 51 per cent of the total police personnel. If the latest statistics are anything to go by, the police force has a force of 41,760 personnel. With nearly 51 per cent being in Kampala, it means more than 20,000 police officers regardless of their rank live and work in greater Kampala.

The Kampala Metropolitan area has 18 policing divisions with a minimum of 250 police officers each. Sources at Naguru intimidated to URN that police were worried about insufficient personnel in Kampala ahead of the political season.

Although police expects 5000 police trainees at Kabalye police training in Masindi to have completed their course to back up its numbers in October, they are reportedly worried about the rising tense political environment.

“Even other authorities will soon be told to hire private security guards. Kampala currently has fewer numbers of police officers. Every political season Kampala is often supported by officers from the course who come and get deployed as probation officers,” the source at Naguru said.

The assistant inspector general of police Asan Kasingye disclosed during the female police officer’s conference that police would recruit an additional 5000 to make 10,000 personnel, which they requested the President Yoweri Kaguta Museveni to allow them to recruit to fix manpower gaps.

Bobi Wine is the man behind his own success, not me - Barbie Itungo

Bobi Wine is the man behind his own success, not me - Barbie Itungo