by watchdog
in Agriculture, News
10 1

Today at the opening of the 18th African Fine Coffees Conference & Exhibition at Sarova Whitesands Beach Resort Hotel in Mombasa Kenya; Owek Robert Waggwa Nsibirwa the current President of Uganda Coffee Federation; received the highest coffee honour of the Coffee Lifetime Achievement Award for his great work in the African coffee industries in particular and the coffee world in general.

The award was presented to him by Dorothy Tembi, the Executive Director at the Geneva International Trade Center.

Currently Owek Nsibirwa serves as the Group Chairman & CEO of the Africa Coffee Academy as well as the President of Uganda Coffee Federation and Chairman of the Central Coffee Farmers Association. 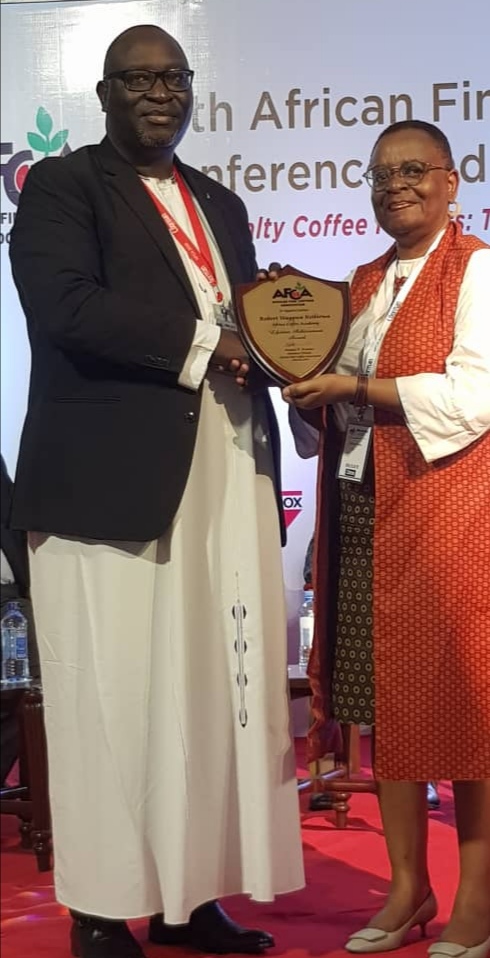 He is the Second Deputy Katikkiro of the Kingdom of Buganda where he also doubles as Kingdom Treasurer and Minister of Finance, Planning and Investments. He is also a prominent Rotarian having served as District Governor for Uganda and Tanzania.

In 2001 Robert Waggwa Nsibirwa was serving as the Program and Finance Manager of Uganda Coffee Federation, the incubation hub for the Eastern Africa Fine Coffees Association – EAFCA when Simeon Onchere made the first presentation in 1999 of the case for a speciality association of East Africa, an organisation which would later become one of the first two employees alongside Frederick Kawuma.

Working with Kawuma the then Executive Director, they started the first Africa Fine Coffees Conference and Exhibition in Nairobi Kenya two years later in 2003.

In 2004 when Frederick Kawuma retired, the Board appointed Owek Nsibirwa to serve as the new Executive Director of EAFCA till 2007 when he took an early retirement to Co-Found the Africa Coffee Academy (ACA) in Uganda, an International firm providing professional, technical and business support to coffee value chains. The ACA currently has branches in Burundi and Kenya and is still growing.

He served on the Board of AFCA for over a decade where he retired three years ago as the Vice Chairman of the Board.

Throughout the life of EAFCA and now AFCA, Owek Nsibirwa has given support both directly and indirectly to the growth of AFCA. He is credited for being the institution memory of this great Association.

Owek Nsibirwa’s work in coffee has been diverse and it has been deep. He served as the Chairman of the 4C Coffee Association in Bonn German – now the global coffee platform for sustainable coffee; and served as a Board member of the Uganda Coffee Development Authority for six years.

He is committed to supporting coffee enterprises as well as coffee initiatives that lead to positive socio-economic change, development and sustainability. The human cost of poverty particularly in the “developing” world fuels his passion for improvement of knowledge and skills, adoption of sustainable methods and technologies and expansion of entrepreneurship of coffee enterprises. He is committed at helping producer groups, coffee enterprise teams and organisations to strengthen their skills and knowledge at all levels, and to build business and indigenous entrepreneurships networks that are sustainable.

“For all that has been said and the much more that has not been said, the Board of Directors of the African Fine Coffees Association found it fitting to bestow on Robert Waggwa Nsibirwa the highest honour of the Life Time Achievement Award today 12th February, 2020,” reads a statement from Mombasa where the conference is ongoing.