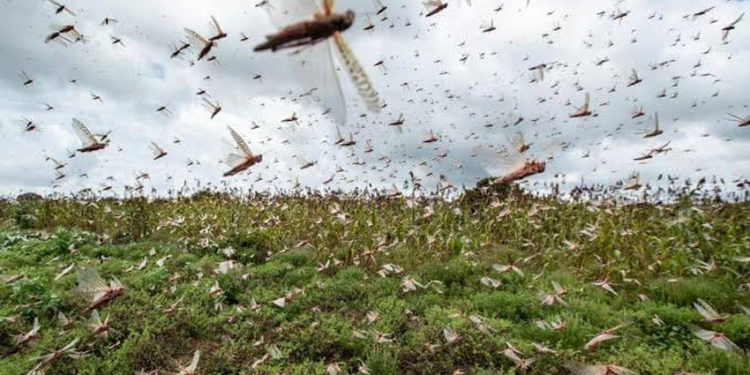 Kampala city traders dealing in insecticides have asked government to mind much about the side effects of the pesticides being used while spraying locusts.

On Sunday afternoon the deadly desert locusts entered into Uganda, through Karamoja region from North-West part of Kenya to Amudat district while other swarms entered through Turkana to Moroto district.

Currently, over three districts; Amudat, Moroto and Nabilatuk have been invaded. The Ministry of Agriculture experts and Uganda People’s Defence Forces (UPDF)  have already started spraying the locusts with chlorpyriphos 48 and cypermethrin 5 chemicals.

However, insecticides traders in Kampala have expressed their worries about the outcome of the spraying process.

According to Halima Nakagwa from Zibala farm shop, the chemicals which are being used by the government are not dangerous to humans if the place is not occupied for seven hours. However, people spraying must also take serious precautions on their eyelids.

“It’s fine if government is using chlorpyriphos 48 and cypermethrin 5 but the question is how ready is it because the two types of pesticides are expensive and they will cost a lot of money and we don’t how far the locusts will reach because according to their speed of movement soon they reach the fourth district so government has to stock more pesticides,” adding that Kenya had been prepared than Uganda but they incurred shortage of chemicals.

Habibu Kavuma from Lyalabisi farm supply also said, “We may fight locusts and then kill other important creatures like our animals both domestic and wild. Even though the pesticides being used have fewer effects, the government would have involved more people with knowledge and experience on pesticides for strategic approaches other than soldiers.

Kavuma also blamed the government for not giving them business to supply that pesticide.

“We have that insecticide in our shops but because there is now a big figure who wants to eat alone we are just hearing about it yet we are also able to supply more and more litres of such pesticides,” he said.

Henry Mukibi, a dealer in pesticides also blamed the government for not involving them in the process.