Locust invasion: Locals in Karamoja stone locusts in a bid to scare them off 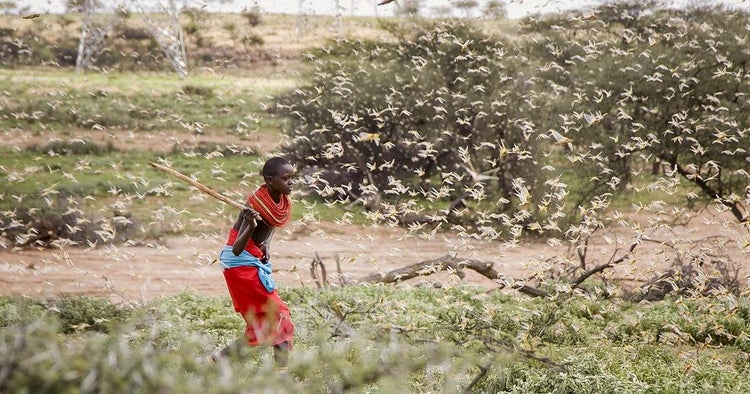 Locals in the Karamoja sub region have resorted to stoning locusts in a bid to protect their crops from destruction.

Desert locusts on Sunday invaded Uganda through Amudat District via North West Pokot in Kenya and have since spread to Nabilatuk and Nakapiripirit districts in Karamoja region.

And although government on Monday dispatched 2,000 manual pumps and 18,000 litrers of  cypermethrin and chlorpyrifos chemicals, to contain the locusts, the locals are said to have started stoning them or burning bushes.

“They were surprised by the large swarms of the locusts that they did not know what to do,” Steven Ariong, a journalist said on Monday.

According to Mr Martin Owor, the Commissioner for Disaster Preparedness, in the Office of the Prime Minister, motorised sprayers that will be mounted on pickups and tractors to spray the locusts have been moved to Karamoja sub-region.

Spraying will be carried on in the morning and evening  because during the day, they are hard to contain, an official from the Ministry of Agriculture said.

He said a team of UPDF soldiers and Uganda Wildlife Authority wardens will to assist officials from the Ministry of Agriculture to spray the pests.

Desert locusts, according to United Nations Food and Agriculture Organizations (FAO) have destroyed vegetation in Kenya as they move toward Uganda.

They travel in dense, crackling swarms which can contain as many as 80 million locusts per square kilometre.

FAO says the locusts can live for up to five months, depending on weather and local conditions. They can lay eggs that can hatch after two weeks, with locusts maturing to adulthood in two to four months on average.

They can destroy about 192 million kilogrammes of vegetation in two days.

US investors to meet Museveni over Shs1 trillion investment project