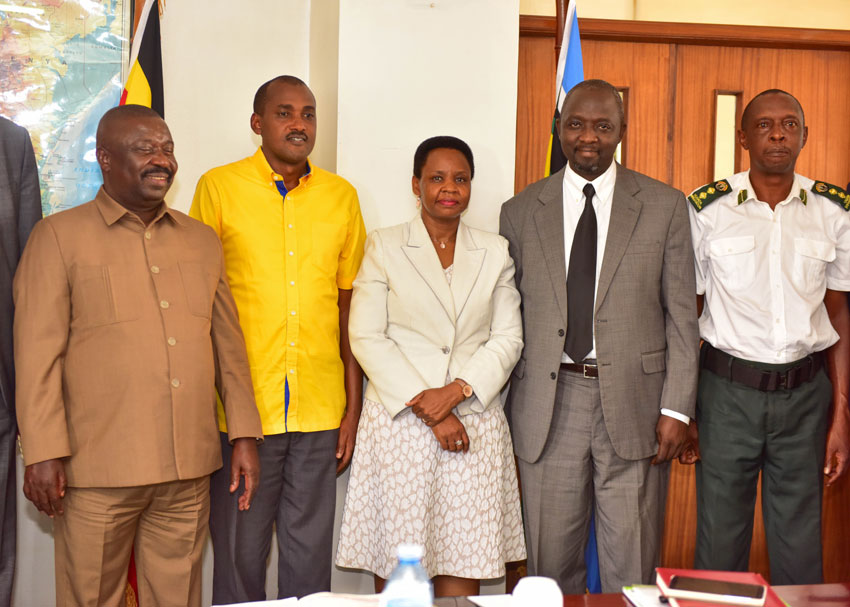 The Minister of Gender, Labour and Social Affairs, Hon. Frank Tumwebaze has tasked stakeholders to work for the safety of migrant workers.

“How do we fight human trafficking that is disguised as labour export? I thank Lt. Col. Nakalema and the Anti-Corruption Unit for the work they have done in fighting the trafficking vice. The situation is bad because we have got inadequate communication. The workers are not sensitized before they travel. The most vulnerable are domestic workers,” he said.

The Minister made the call on Friday at his Ministry’s headquarters in Kampala during a meeting of stakeholders that was intended to smoothen working towards a coordinated approach on the safety of migrant workers. The meeting attracted several Government agencies including the Ministry of Labour, that of Internal Affairs and the Anti-Corruption Unit in State House, headed by Lt. Col. Edith Nakalema.

The Minister observed that when Information Communication Technology (ICT) is used there would be assurances of transparency adding that all agencies can be held accountable when the service is well utilized.

While noting that there is no coordination between various agencies, the Minister said that most labour companies do not follow up the welfare of Ugandan workers once they go out of the country. He, therefore, stressed that Government would not tolerate the cartel of characters who are in the business of promoting human trafficking.

State Minister for Labour, Employment and Industrial Relations, Hon. Mwesigwa Rukutana said that Labour Attaches are to be appointed in the Middle East in order to address the bad situation facing Ugandan workers there.

The Head of the Anti-Corruption Unit in State House,, Lt. Col. Nakalema said that by yesterday (Thursday 6th February 2020) her Unit had registered over 800 complaints related to labour export transactions. She said that the country has got over 40,000 Ugandans working both as skilled and non-skilled workers in the Middle East.

“The working conditions are fair except for maids and domestic workers. Many have reported having been assaulted, sexually abused and no rest as some of them are compelled to work in several homes. Uganda’s Embassy in Abu Dhabi receives over 15 complaints per day. Our Embassy does not have funds to feed and provide welfare to the complainants. About 90% of the maids who are recruited are taken to the Middle East illegally,” she said.

Lt. Col. Nakalema revealed that some of the workers that have returned have been maimed by their employers; adding that today there are 58 admitted at Butabika mental hospital.

She proposed that stories of the victims of torture should be publicized in the media as part of measures to dissuade the rest from travelling for illegal labour deals. She disclosed that the Anti-Corruption Unit in State House has worked and enabled 26 Ugandan victims to return home.

She added that 6 bodies of people who died in Kuwait, Oman and Saudi Arabia were recently returned to Uganda. She revealed that her Unit had coordinated the prosecution of 6 officers involved in the labour export scam.

The Principal Immigration Officer, Robert Kanuma, proposed that all passengers should be required to have return air tickets in order to check the vice of illegal migration and labour.

Mr. Stephen Kirenga, who is Head of Marketing of NITA, said that they would establish a system that would allow for secure and instant information sharing with all the agencies.

The meeting called for and resolved to hold another exhaustive session with all the labour export agencies in the country.

Uganda has confirmed more nine coronavirus cases, bringing the total number of infected people to 44. This has been revealed...

President Yoweri Museveni has reaffirmed that any person who shall be found distributing food will be arrested and crushed. On...