Museveni calls on Ugandans to expose the corrupt as former PPS Kamukama, seven others swear in as ministers

President Yoweri Museveni has today January 13, called on the public to report cases of corruption in a bid to stump the vice out of Uganda’s society.

Citing Prime Minister Ruhakana Rugunda, the President said the youthful appointees to Cabinet should learn from their older colleagues and serve the country diligently.
“I call upon all ministers and public servants to desist from engaging in any form of corruption. Corruption by any government officials is a great betrayal to Ugandans who are desperately yearning for service delivery,” Mr Museveni said.

He added: “I implore the general public to embrace this fight and report the crooked officials with evidence, as opposed to rumours and we will take action,”
Mr Museveni last year launched a new fight against graft when he engaged in a walk against corruption. During the swearing in Mr Museveni said he had carefully studied the new appointees and ensured their records were not dotted before appointing them.

Notable among the new appointments is the President’s former Principal Private Secretary Molly Kamukama, who joined the President’s office in November 2016 and served a three-year contract before choosing to join active politics. Word in the grapevine has it that the youthful Kamukama will contest for Woman MP of newly-created Kazo District. 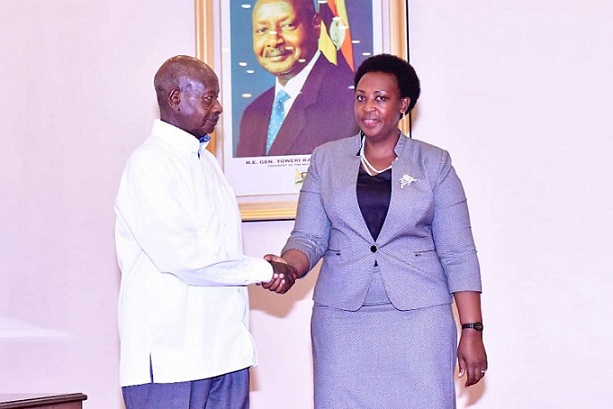 After the swearing in ceremony, Ms Kamukama told journalists that her focus was on monitoring the five sectors of the economy which Mr Museveni’s government has over the last years emphasised as key in promoting social-economic transformation.

She expressed enthusiasm to serve in her new position. She noted that her background in public service and her recent deployment working with the President gives her an added advantage in the new role.
“In this new position, I will work closely with my fellow Minister to check the 5 pillars of our economy, citing challenges that need to be addressed and making recommendations to the President on how to rectify issues that may arise,Mrs. Kamukama stated.

The five sectors of the economy that the President has talked about consistently are; ICT, Services, Industry, Agriculture and Oil&Gas as the key triggers which once addressed will catapult the economy to middle income status that has been the aspiration of the Country and is enshrined in the NDP3.