by Mike Ssegawa
in National, News
24 2

OP-ED: Uganda sitting on time bomb by denying Asians access to their properties 40+ years after expulsion

Speaker Rebecca Kadaga has sent to Canada a select task force of the Parliamentary Committee on Commissions, Statutory authorities, and State enterprises (COSASE) to probe the departed Asians property mess.

The subcommittee will hear and verify claims made by managers of the Asians Custodians Board and the current owners of the property, in what is set to be table shaking exercise.

Hundreds of Asians who relocated to Canada either gave powers of attorney to people who have been telling them lies about their property statuses in Uganda, or, lost interest in property all together and remained unclaimed for years but were taken by dubious people.

Some of the properties was also grabbed by powerful individuals and threatened the departed Asians into silence. 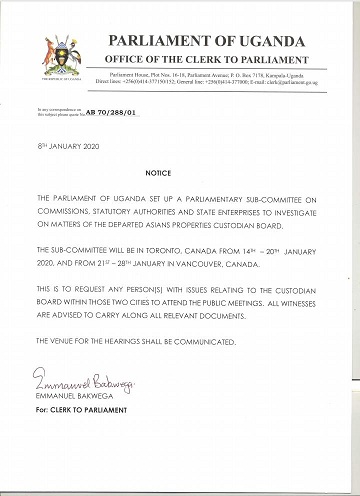 A January 8, 2020 notice written by Emmanuel Bakwega on behalf of the Clerk to Parliament, says, COSASE will be travelling to Canada, and later to United Kingdom in search of Ugandans who were either paid, or never claimed their properties.

The MPs will visit Toronto and Vancouver cities for this exercise mid and later this month.

By the time the committee returns, the property industry might be shaken in a way many people will not expect.

The parliament of Uganda set up a parliamentary subcommittee on commissions, statutory authorities, and state enterprises to investigate on matters of the departed Asians custodians board.

This is to request any person (s) with issues relating to the custodians’ board within those two cities to attend the public hearing. All witnesses are advised to carry along all relevant documents.

The venue for the hearings shall be communicated.

Emmanuel Bakwega for Clerk to Parliament.

The Ministry of Gender, Labour and Social Development has suspended the activities of six labour recruitment firms for charging illegal registration...

Why should I mobilise MPs to censure Gen Tumwine, asks Mbwatekamwa

The Kasambya County Member of Parliament has hit back at critics who have castigated him for failing the censure motion...

The Uganda Parliamentary Press Association (UPPA) has started its savings and credit Sacco with focus on improving journalists’ welfare. Speaker...

Rwanda’s National Public Prosecution Authority (NPPA) has said that singer Kizito Mihigo, who was found dead in a Police cell...

OPINION: Ugandans abroad can play a key role in development