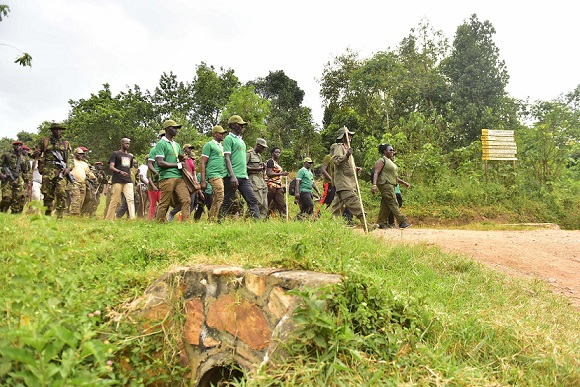 The 195-kilometre walk started from Galamba, in Wakiso district and is expected to end on Friday, January 10, 2020, at Birembo in Kibaale district.

According to the organisers, the trek is intended to commemorate the heroic sacrifices of Uganda’s freedom fighters.

On the first day, the trekkers walked for over 30 km. Then, the President spoke to wanainchi. Veterans also got a chance to tell him how they have spent 30 years since bush war not receiving any help from him. Among these was Mutebi Nakibenge who fetched food for Museveni while in the bush but complained about being forgotten.

“Me, Nakibinge have never been appreciated even after fetching eatables for you in a wheelbarrow and spying for you. You even took us to Masaka where we escaped a bomb blast,” he lamented.
On the second day, trekkers moved for about 28km. However, most of them walked for only about 10 km and boarded vehicles. On this particular Sunday, Museveni dished out envelopes to the elderly, an action he later condemned saying.

“To the youth, it’s not good to give them money. However to aged people it was good because such actions are needed and they are aged but youth still have time. We can invest such money,” said Museveni.

OP-ED: My thoughts on the rape debate in Uganda

OP-ED: My thoughts on the rape debate in Uganda