Police on a hunt for reckless driver caught on video

by Catherine Apolot
in National, News
4 0

The territorial Police in Bombo, is investigating a traffic incident of reckless and dangerous driving, that was caught on video and widely shared on different platforms of social media.

According to Police Spokesperson Fred Enanga, the incident occurred on Saturday, July 27, 2019 at around 3pm, along the Bombo – Luwero Highway, where the driver of a Land Rover [old model] under registration number UXW 839, was transporting eucalyptus poles that were dangerously loaded and swerving in both directions. It was being driven in a manner that posed a substantial risk, of severe physical injury, to other motorists and road users on the highway.

“The video footage, also captured a police motor vehicle registration number UP 2954, whose occupants attempted to stop the reckless driver. The recording did not bring out the full story, however, the driver parked aside, and fled from the scene. Efforts to track him down for arrest are in place, for misuse of the road and dangerous loading.  The abandoned motor vehicle was impounded and exhibited at Bombo Police Headquarters,” said Enanga.

“We want to thank witnesses of such traffic violations, whose actions in recording videos helps in spreading bad behavior on the roads. Such videos, are also a tool of seeking justice on social media by shaming the wrong doers.”

The Professional Standard Unit has also taken interest in the matter, and investigating the slow response of the police and circumstances under which the driver fled from the scene. 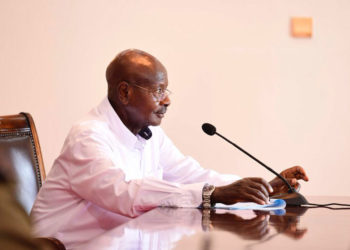