by Allen Kisakye
in Entertainment, Showbiz
23 0 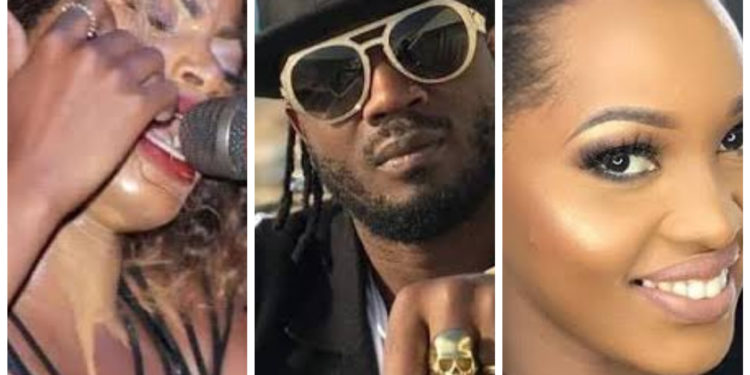 Ugandan artistes always surround themselves with incidents that can entice the media into talking about them. Though some incidents are intended, others just happen.

Here are some of the artistes and their embarrassing moments that happened in front of the camera.

Spice Diana. The anti-kale hit maker became a public joke when her wig fell off the head during DJ Shiru’s live mix show on Bukedde TV. To make matters worse, her hair was not combed and it was looking terribly bad. With a fake smile, she picked up the wig and placed it back on the head but this moment was already caught on camera. Spice tried to stand the embarrassment and claimed that it was done on purpose, but who does that?

Sheebah Karungi. The ‘Swag mama’ lost all her swag when fake makeup melted down her face. This incident happened during the Kisasi Kimu Video Premier at Club Amnesia. The TNS diva was surrounded by an unforgiving photo journalist who flashed all the moments as fake makeup was melting off her face and exposed them all over social media. It was reported that after this embarrassment, Sheeba fired her makeup artiste ‘Adrine Kamara’ and she is currently working with Monalisa of Mona Faces

Tip Swizzy. He is one of the best performers on stage but things did not go well with him during the B2C live concert in 2018. As Swizzy was singing and dancing along his song ‘Squat, Stand is an Optional Dance’, his green Kitengi pants couldn’t take in the pressure, splitting right in the middle. Amidst his performance, he realized that the cheers he was getting from the crowd were not for his performance but something else. That’s when he noticed that his pants are damaged. However, he performed to the last because he was already embarrassed. After the show Swizzy claimed that the incident was a wardrobe malfunction but not intended.

Irene Ntale. Party people couldn’t stop laughing when the ‘Sembera’ hit maker fell off the stage during the ‘Million Dollar party’ at Club Guvnor as she was preforming. Amidst the laughing crowd and flashing photography, Irene shamefully stood up with her strained leg and asked, “Is this New? Hasn’t any of you never fallen down”. However revelers said that Ntale hit the stage when she was drunk and this caused the incident.

Bebecool. Though he tried to prove that he is ‘Big Size’, we can’t deny the fact that Bebe Cool felt so embarrassed, be-littled and small when fans threw empty bottles at him during the Swangz All-star Concert that happened at Lugogo Cricket Oval. This incident pushed Big Size to the edge and publicaly announced that he won’t be performing on local shows till further notice. People were mad at Bebe Cool for supporting social media tax and trashing fellow musicians who protested social media tax bill.

Rachael Namiiro. She was the most trending artiste after the Kyarenga Concert when her black skirt fell off as she was performing Tukigale alongside Eddy Yawe. Namiiro was only saved by the brown skin tight that she had inside the skirt. But after the event, she came out and apologized. Namiiro claimed that during the performance she felt like her skirt had gone loose but couldn’t leave the stage.