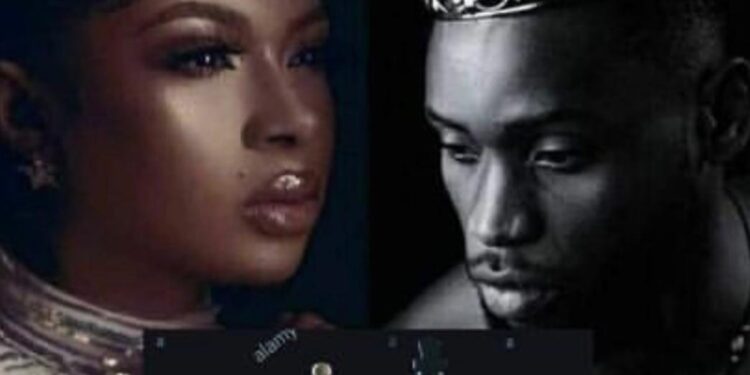 Unlike other Monday evening nominations that always take place after the head of house games this time they were carried out before and the nominated housemates were Pere, Saga,Emmanuel,Liquorose, Whitemoney, Jaypaul, Saskay and Jackie B. These housemates had a chance to change their fate by winning HOH or being the 1st runner-up.

Emmanuel the 24 years old model topped the game and was crowned Head of which nullified his nomination (immunity) hence making him safe for this week.
The new Head of house is a model and has won Mister Africa international and was also named Mr Ideal Nigeria. Emmanuel was also the first Nigerian to win the African International award.

On winning HoH, Emmanuel nominated Liquorose who is his house girlfriend as Deputy Head of house 🤔hhmmmmmm , they will be sharing the HOH luxury room.
Can’t wait for highlights of what may turn out to be a honey moon since these two were already sharing a bed and getting cozy while in the common bedroom, what will happen now that they have privacy?

HOH and his deputy received a movie date treat from show max and they chose Whitemoney and Jackie B to join them.

The 1st runner up and Veto power holder (save and replace) was Pere who used this chance to save himself since he was initially nominated and replace Queen who wasn’t among the nominated housemates.
Pere and Queen got into a huge fight last weekend because apparently Pere likes bullying Whitemoney who is Queen’s favorite housemate so she definitely had to come through for him buy telling Pere that he is no better than any of the 16 housemates who were in the house at that time and that if he feels big he should pack and leave the big brother house ( guess it’s payback time) anyways it was expected.

The housemates that are up for possible eviction on Sunday are Queen, Saga, Liquorose, Whitemoney, Jaypaul, Saskay and Jackie B.
Good luck to all of them.
Please VOTE for your favorite housemates to stay in the game.
Voting lines are open from Monday to Thursday .