by Stephen Kalema
in Court, News
5 0 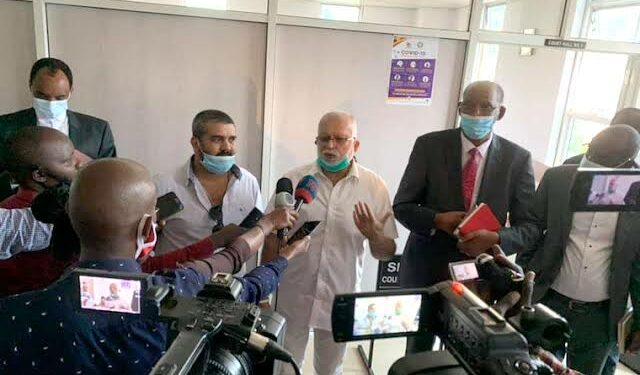 Businessman Sudhir addressing the media after a court session recently

The lawyers of city tycoon Sudhir Ruparelia led by Peter Kabatsi want the justices of the Supreme Court to order Bank of Uganda (BoU) to pay all costs their client incurred during the Crane Bank case.

While presenting their submissions, lawyers, Kabatsi, Joseph Matsiko and Elison Karuhanga said BoU was primarily behind the multi-billion commercial dispute against the Sudhir and not Crane Bank in receivership as portrayed by the central bank’s lawyers.

“It would cause a lot of injustice if BoU lawyers turn around to say the ‘shadow’ should bear the costs of the suit. The withdrawal of the appeal could only be effective after all issues in the matter are ruled on. And by the way, they are withdrawing their appeal, their move is with an intention to throw the responsibility to somebody else, My Lords, this is unacceptable.”

“Crane Bank is no longer in existence, hence it cannot be ordered to pay costs since it had been closed by BoU. Then why do they want to withdraw the case, this is their move to avoid paying our client’s costs. Therefore, until this court directs otherwise, the appeal is still pending that is why it was cause-listed today for mention. My Lords, that notice of withdrawal, purports the reversal of who pays the costs.”

It must also be remembered that on August 29, 2019, then presiding judge David Wangutusi dismissed the commercial dispute on grounds that when Crane Bank was put under receivership, it lost all its legal powers to sue or be sued, therefore it can pay any costs because it ceases to exist.

However, BoU’s lawyer, counsel Albert Byamugisha, stiffly made it clear that the central bank withdrew the case because they no longer have any interest in prosecuting it. He also confirmed that the Bank of Uganda can not be held liable to pay costs in case it withdrew.

Sudhir welcomed the plea of his lawyers and said they did their task now the ball is in the hands of the judges.

“I think the deliberations were good and we are waiting for the ruling on notice. Basically, we have two things, the dismissal of the case and who pays the cost.”

You don’t have any right to attack a decorated scientist like Dr. Musenero- Museveni warns Parliament