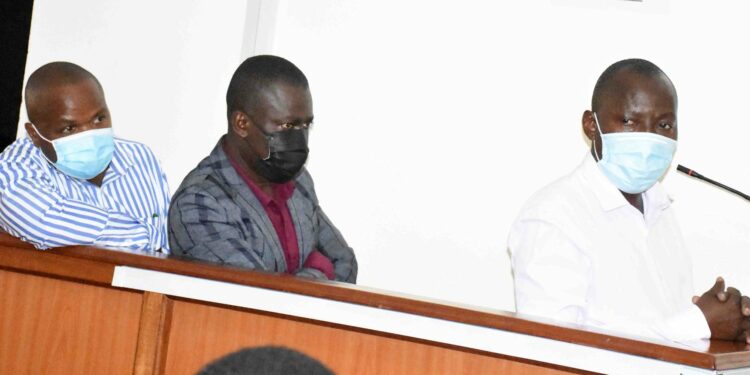 The trio was charged with corruption, abuse of office and causing financial loss to the government of Uganda.

The Anti-Corruption Court has on Tuesday charged three officials in the Office of the Prime Minister for allegations that they procured substandard food and nonfood items meant for Kasese Flood victims.

The trio was charged with corruption, abuse of office, and causing financial loss to the government of Uganda.

The officials were arrested at the OPM by the State House Anti Corruption Unit headed by Col Edith Nakalema in early August over the purchase of poor quality relief items for victims of Kasese floods.

Their arrest followed a directive by Prime Minister Robinah Nabbanja who stopped the distribution of blankets and mosquito nets saying they were substandard.

“Kasese is not a dumping ground, I have rejected blankets and mosquito nets because they are substandard. The supplier must bring good ones because these are the things that paint a bad image for our government,” Nabbanja said before boarding a plane back to Kampala.

She said mosquito nets were too small, the blankets too were too light and not fit for use by human beings.

“I have directed that they are returned to Kampala because they are substandard,” she said.

The office of the Prime Minister has been in the spotlight for corruption scandals.

Not many years ago, the same office was making headlines for corruption of funds for Northern Uganda reconstruction, in which then Permanent Secretary Pius Bigirimana was said to be the whistleblower.