by Everest Mukiibi
in Agriculture, Business
1 1
0

The Bishop of Central Buganda Diocese Rt Rev Micheal Lubowa has vowed to transform the Diocese into a self sustainable model Diocese with excellence in agriculture, household incomes and Community resilience.

Bishop Lubowa revealed this on wednesday while receiving a dummy cheque of Ugx 70 million presented to him by Rev Canon William Ongeng the Provincial Secretary of Church of Uganda.

The money is part of government support through National Agriculture Advisory Services (NAADS) to procure a ginger processing machine at St John’s Cathedral,Kasaka in Gomba district.

Bishop Lubowa thanked the President and the government of Uganda through NAADS for supporting the social economic transformation of the Diocese.

He led the visiting team from the Provincial Secretariat to the Diocese’s coffee, banana plantation, the Diocesan farm with cows, pigs, chicken and goats, the Maize mill and the newly constructed Bishop’s Palace.

He revealed that the Diocese is set to construct a Pension House to generate revenue to support the retired clergy, Diocesan workers and advance the self sustainability agenda of the Diocese.

Rev. Canon William Ongeng the Provincial Secretary advised the Diocese to ensure proper accountability and transparency during the implementation of the project.

He commended the Central Buganda Diocese for the established projects and noted that this is one of the reasons why the Diocese was identified as a pilot area for the project together with South Ankole Diocese,West Lango Diocese,Kitgum Diocese and Busoga Diocese.

Speaking at the same function, the Provincial Treasurer Balaam Muhebwa called upon the Diocese to take good care of the cows, pigs and ginger plant given to them to ensure that all Christians in the Diocese benefit.

He disclosed that Church of Uganda received Ugx 2 billion from the government through NAADS and will be used to implement agriculture programs in the entire Province.

The Acting Director of Church of Uganda’s Directorate of Household and Community Transformation Irene Anena tipped the Diocesan leadership to embrace agriculture.

“Agriculture being the backbone of Uganda’s economy, we need to invest time and resources to it as a strategy for socio-economic transformation. This also calls for mindset change and the appreciation for value chain development. This will ensure community empowerment on food and income security,” Ms. Anena advised. 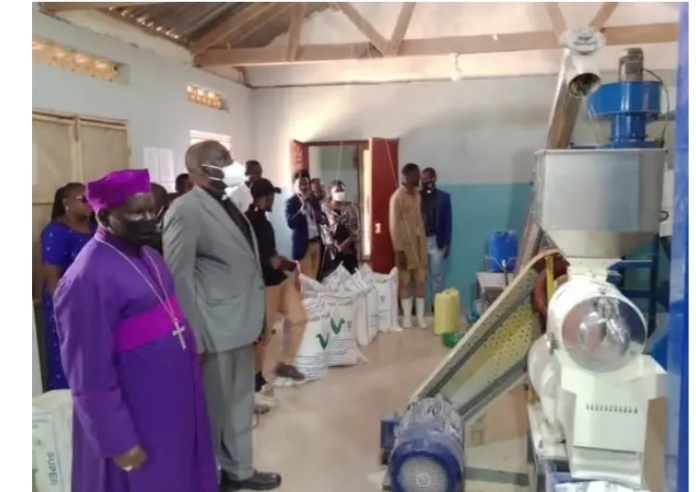 According to the Provincial Communications Officer, Sadiiki Adams Mugume, the purpose of this Agriculture Program is to mobilize equip and position Church of Uganda religious leaders, and community/farmers and farmer groups as community mobilizers and act as mindset agents to tackle mindset change toward Agro- Industrialization.

Sadiiki told journalists, that the program was also designed to rally Church of Uganda leaders, congregations and the community towards agricultural production of priority crops for food and nutrition security and improved incomes.

This follows a Memorandum of Understanding signed on 24th March 2022 between Church of Uganda and the Government of Uganda through National Agriculture Advisory Services, NAADS, to strengthen agriculture production in the Province.

The Government of Uganda subsequently injected Ugx 2 billion in Church of Uganda to establish farmer demonstration and learning hubs for selected enterprises in the Province, training farmer groups on appropriate agronomic practices for selected crop enterprises and other activities.

Over 1000 LDP Recruited As UPDF Concludes Exercise In Eastern Uganda

Over 1000 LDP Recruited As UPDF Concludes Exercise In Eastern Uganda