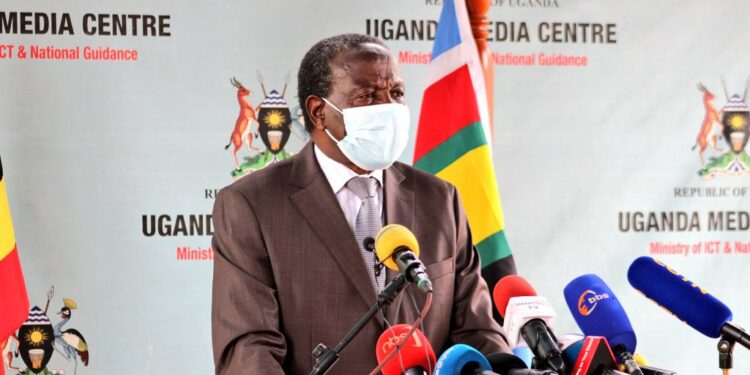 The Minister of Finance, Planning and Economic Development, Matia Kasaija has urged Ugandans to develop a saving culture because it’s one of the supporting pillars in securing their financial future.

Kasaija made the remarks on Wednesday at an event where the Capital Markets Authority (CMA) was celebrating the attainment of Shs1.15 trillion in Assets Under Management (AUM) by licensed Collective Investment Scheme (CIS) managers.

Speaking to journalists at Uganda Media Centre, the Minister noted that as many Ugandans are aware, currently the government’s goals are to transform the society from a predominate peasant society to a modern and prosperous one by 2040 and to reach that level majority of citizens must get accustomed to saving.

“While this is the main goal; we have also launched several initiatives to improve the level of savings and the general livelihood of all Ugandans. These include the ‘emyooga’ program and the Parish Development Model which will bring planning, budgeting, reporting and delivery of interventions to bring and deliver services closer to the Ugandan people,” he said.

Kasaija added that while the government is doing all it can to ensure that there is an enabling environment for all Ugandans to attain middle-income status and for private sector growth and development, the Ministry of Finance is yet to fully exploit the vast investment and business opportunities in Uganda.

Keith Kalyegira, the Chief Executive Officer of the Capital Markets Authority also said that as savings improve, the focus of Ugandans should now turn to avenues, such as the Collective Investment Schemes, through which these savings can earn a high return while keeping risk as low as possible.

He added: “We would like to see more Ugandans choose CIS as their investment vehicles of choice regardless of the size of their savings. The interest earned per scheme type is averages at an estimated 10 per cent or more on an annualized basis, which is attractive in preserving the wealth of Ugandans against inflation.”

Kalyegira urged that Ugandans who have not yet saved through a Collective Investment Scheme; CIS’ offer a way to earn interest through passive investments in Government of Uganda Treasury Bonds and Bills, Fixed Deposits, Call Deposits, Commercial Paper, Corporate Bonds, Company stocks and other financial instruments in East Africa.

According to Kalyegira, the attainment of Shs1.15trillion in capital markets is a major milestone in Uganda’s march towards financial inclusion and savings mobilization that has been attained three years ahead of schedule according to the CMA’s four-year Strategic Development Plan (2021/22 – 2024/25).

“CIS’ ensure that Ugandans enjoy the benefits of having their savings managed by professionals. There are also the benefits of risk diversification, lower transaction costs, and access to a wide variety of securities investments with a small sum of at least Shs100,000.”

At the same time, the total number of Ugandans with CIS accounts at the end of March 2022 was 32,998 investor accounts, compared to 26,936 investor accounts in the same period. This growth in AUM and clients can be attributed to increased awareness about the benefits of investing through CIS vehicles among Ugandans.

Meanwhile, CMA was established in 1996 by the CMA Act Cap 84. The Authority has several functions under this Act which include approval of prospectuses or offer documents; development of the capital markets; protection of investors, and management of the investor compensation fund, among others.

Todwong to Omoro residents: If you vote our NRM candidate it will be easy for us to lobby for you