However, the National Oil Palm Project (NOPP) has already put interventions in place to overcome these challenges.

by watchdog
in Agriculture, Business
3 0 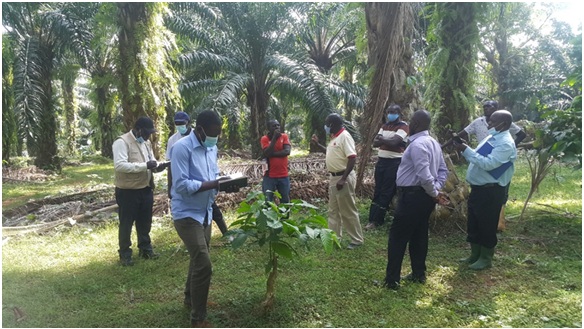 Smallholder oil palm farmers in Kalangala have been faced with a challenge of pests and diseases affecting their gardens with one case of Ganoderma trunk rot (0.86%), two cases of palm weevil (1.72%) and one case of boron deficiency (0.86%) detected in the Kayunga Block.

Surveillance information obtained through research in the last two years shows that there is no new oil palm disease or pest that has been observed and ascertained by the assessment team. Rather it is Fusarium wilt, Ganoderma, palm weevil and nutrient deficiencies which were earlier reported.

A team of experts led by Dr. Gabriel Ddamulira of, the Principal Researcher for Oil Palm at the National Agricultural Research Organisation (NARO) confirms that disease and pest occurrences are not yet at levels which can cause economic loss to oil palm production in Kalangala. Charles Ssembatya, the National Oil Palm Project (NOPP) Agronomist and and Moses Otuba, a Pathologist from NARO were the other members. They were assisted by farmers and members of the Kalangala Oil Palm Growers Trust (KOPGT).

The findings indicate that that pests and diseases mostly affect smallholder farmers whose management is inadequate compared to the nucleus estate. “Majority of the oil palm fields with miserable palms and low yields were poorly managed with uncontrolled woody shrubs growing within the plantation. Some were planted on rocky and sandy soils with less soil and yet water conservation measures not observed,” DrDdamulira’s technical report reads.

“Furthermore, owners of these fields were neither applying fertilizer nor pruning properly which made the plantation look abandoned. The poor management coupled with magnesium deficiencies made the palm leaves to have burnt appearance which made the farmers to think that they are diseased,” states the report.

However, the National Oil Palm Project (NOPP) has already put interventions in place to overcome these challenges.

Fusarium wilt has also been gradually managed by the nucleus estate (OPUL) through quarantining of the infected palms, systematic use of fertilizers, removal of dead palms and correct application of agronomic practices such pruning, good soil and water conservation practices.

The outcome from the census assisted effective evacuation of fertilizer stocks from the store and right quantities required by each farmer has been ascertained avoid excess application. The application of fertilizers in the right amount is anticipated to boost yields and reduce on nutrient deficiencies.

The smallholder farmers are being supported through KOPGT which initiated a deferred payment of fertilizer loan to 18 months following a fact-finding assessment of the performance of outgrowers’ fields which has led to increase in fertilizer uptake by farmers. This will improve good field practices among the farmers.