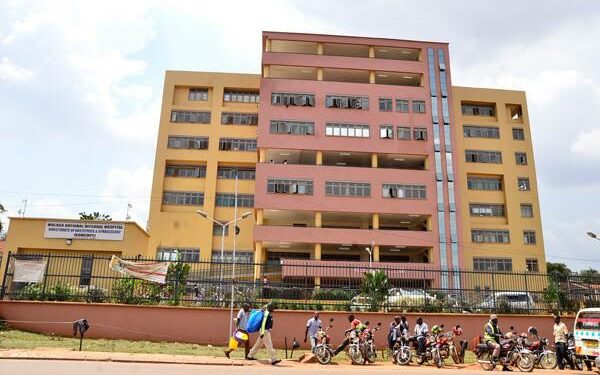 When we think of ‘Government’, we often think about the politician we don’t like, or the Police lobbying tear gas at us, or in some cases, the taxman/woman who just won’t let our pockets rest without his/her long hand ever piercing into our pockets to vacuum our hard-earned money.

The thought of Government is usually one that inspires anger and disgust- we rarely see ourselves in the Government or the Government in us. For a moment, if you can forget the gloom and doom, I can tell you a little story and why I am proud of each of you.

On the laps of Salaama road sits a giant architectural piece that towers above other buildings in the area. This magnificent piece is set on the foot of a hill offering you a bird’s view of the environs. If you stand at the balcony on the western side of that building, your eyes are treated to the breathtaking view of Munyonyo-Makindye area catching a view of stunning houses that are home to Kampala’s elite.

This particular building belongs to nobody- it belongs to everybody; its name- Kiruddu Hospital. Damn! What is Henry is talking about? What good is there to speak about Kirudu Hospital!! So you may think, but hold up. Listen to me. I will tell you a little story about that Hospital.

Kirudu Hospital has had its fair share of beatings in the media. Like many others, it’s that one place with great Doctors, good nurses, and other para-medics but one that is overwhelmed by the numbers amidst meager resources- simply a place where medics just soldier on, doing the best with the little they have.

Now, Kiruddu Hospital has everything to annoy you-everything. BUT on the 5th floor of that Hospital, there is something that goes on that I wanted you to know about. The southern wing of that hospital, on the fifth floor, is home to an interesting caliber of patients. Patients whose lungs gave way and their chance of survival entirely depend on the continuous flow of Oxygen.

In Ward 5A, there are patients who have been lying on the same bed for close to 2 years, with an oxygen tube firmly stuck on their nose, because their lungs lost the natural ability to collect, filter, and funnel oxygen through the body. These patients rely on Kirudu Hospital (a place owned by nobody but everybody- you and me), to keep alive. AND that Oxygen comes free for all.

Around April of this year, one of the longest residents at Kirudu Hospital, who had spent the last 36 months fixed on the same bed, and on oxygen therapy passed away. He had been there on account of your money and my money- the government.

Another one who had spent about 2.5 years died a couple of weeks ago. The denominator in all these cases is that these patients were in that hospital, provided with free oxygen throughout to their last day. Considering how dramatic the charges for Oxygen therapy in private Hospitals got during the peak of the COVID-19 pandemic, it is heartwarming to think about these individual cases and see the beauty of the collective- the result of our contributions…and how, in some way, our little contributions keep people alive.

Think about Tumwine Ronald. He is a resident of Ward 5. He has been there the longest of all currently grounded at the hospital. He is only 25 years old-but his lungs got damaged, he is permanently fixed on Oxgyen. All because you and me contribute in some way.

Think about Gafalanga Guillaume, a 48 year old man used to work in a gold mine…and damaged his lungs. He has been there for one and a half years. He has lost contact with most of his family and relatives. If he sees a stranger greet him, that feels like family.

Imagine, being stuck on a bed, with only an oxygen tube as your daily companion? He relies on the goodwill of Doctors and other people who come to check on their patients and offer compassion after learning about his condition.

What about Christopher Muwanga. He is 53 years from Seeta. He has been at Kiruddu Hospital for one year. He is also permanently fixed on oxygen. Rarely gets any visitors- and the loneliness is worse than the disease.

Those are just a few but there are many other patients who go to that place we all despise to keep alive. The oxygen taps have kept flowing…on and on…for the poor and rich alike. AND for those people, it means the whole world to them.

There are people called the ‘unknowns’. People who are either picked by the Police, or good Samaritans and brought to the hospitals. People whose details are not known and who are simply there, because the state/government/you and me, are there- the imperfections notwithstanding.

There is doom and gloom in our society, and it can get frustratingly annoying-but the sights and sounds at Ward 5 of Kirudu Hospital offer a little sunshine to the coldness we feel. It’s refreshing to see some of these things.

For someone to be getting Oxygen, every day, every hour, for three years- because of all of us, is a beautiful feeling. We never hear the stories of those who walk out of Kirudu Hospital alive, or the times a Doctor will offer their money to buy a patient medicine or that nurse who shares their food with a patient who relies on strangers…but these stories exist.

The wheels of goodness keep turning at Kirudu Hospital, and our brothers and sisters who man that place know the beauty and burden of the collective.

Most of the patients in that ward can not help themselves. There is a woman, a volunteer- not an employee of the hospital, who moves into that ward every day, cleans the patients especially the seniors, washes their clothes, cleans their utensils, gives them their tablets for the day, encourages them, prays for them- all for free. The next day she returns and does the same…on and on. She is not paid by anyone- she is just that little beautiful sunshine that symbolizes the ever-abiding presence of goodness in humans. She is absolutely amazing and selfless.

If warmth has a tone, goodness a colour, and love a face, Ward 5 of Kirudu Hospital is it. You will hear a million bad stories and complaints about Kiruddu Hospital, but you will never hear about these good stories of love, support, compassion, and the beauty of the ‘collective’.

As I end this story, I am seeing three faces of Government – There is the taxman/woman, then those who allocate what is collected, and those who do the best with what they have been given. We may be angry with the first and the second, but we should never forget the last one.

In the shortness of time, we may never truly appreciate how much what we give- voluntarily or otherwise, does to keep others safe and alive. No matter what the imperfections of the collective are, it is great to see the wheels of goodness turn.

How could the State rearrest MPs Ssegirinya and Ssewanyana without first informing me? Speaker Oulanyah fumes