by watchdog
in Conversations with, Op-Ed
12 1 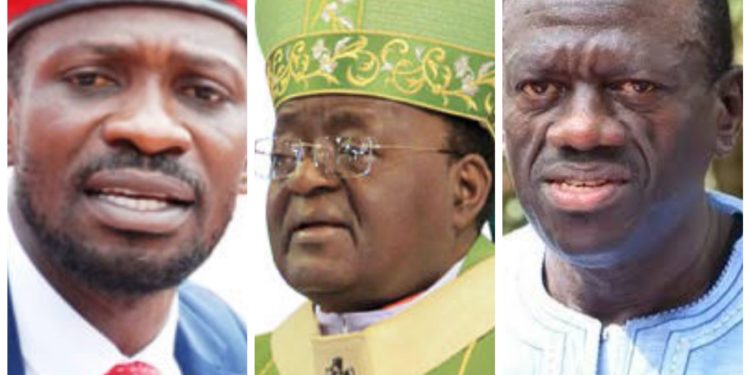 Embarrassed, especially after the Catholic church publicly said that Lwanga died due to blood clot in the artery to the heart, Besigye deleted, ‘corrected’ and issued a half-hearted apology to for his sadistic and self-serving claims, insisting that he couldn’t rule out foul play by the ‘junta’. In 2006 Besigye and wife Winnie Byanyima claimed that government planned to poison him while in Luzira prison.

Besigye and Kyagulanyi who now rival each other for leader of opposition tipped into cheap politics as the former hoped to resurrect his ruined fortunes now inherited by the later. Referring to Lwanga’s alleged previous complains, they falsely claimed that government could have killed him in retribution for his stand on democracy, good governance and rule of law.

To the mendacious we can only say that there have been many deaths of truly mighty leaders than Cyprian Lwanga among them Edward Mutesa, Milton Obote, Yusuf Lule, Oyite Ojok, Idi Amin, and Abu Mayanja who are now only historical footnotes. Worldwide people die suddenly and only medical examination can tell with certainty the causes. And quite frankly, none of them knows Kizito Lwanga than Museveni who has related with him from back in the days in the bush war 1981. Let Archbishop Cyprian Kizito Lwanga rest in eternal peace.

Having lost ground, Besigye has reduced himself to a media troll pandering on every stupid rumour swilling around akin to jumping into the fray while fleeing from the barbecue pit. Kyagulanyi and his sidekicks have recently been alleging so many kidnaps, disappearances, attempted assassinations, and deaths which are mostly hyped and dramatized to frighten and build false political capital. For trying to drag Museveni’s name into the dirt over the death of Kizito Lwanga, Besigye and Kyagulanyi deserve a middle-finger salute.

There is no value undertaking a point-by-point blow at Besigye or Kyagulanyi’s views on what Kizito Lwanga was, on the salient questions about the current politics and how it reflects our past troubled times. Likewise, this column isn’t meant to defend Museveni’s character and record, as there’s plenty of well-thumbed evidence suggesting that he has often acted in an enlightened fashion. President Museveni and government have the best of relationship with all religious institutions never seen before in Uganda.

But what sticks in my throat, however, is the innuendo that President Museveni could somehow be regarded as a cowardly rogue who sponsors assassination of those he even remotely disagrees with. Yes, Lwanga has, especially recently been mildly critical of government. Yes, many priests and NGOs leaders have rightly expressed concern over human rights trends and the democratic space, and yes, opposition politicians and the media have occasionally been unfairly treated. But nowhere is there evidence of horrendous abuse, lack of accountability or absence of the rule of law in Uganda otherwise it wouldn’t be a safe haven for the millions of refugees, while so to speak, is hell to its citizens.

That said, Museveni’s support to religious freedoms, and institutions are beyond counting here and can best be confirmed by the beneficiaries. But suffice to mention Namugongo Martyr’s shrine redevelopment, saving the Church House from the claws of a bank, direct financial contributions, and completion of the Old Kampala mosque that had stalled for decades.

Kizito Lwanga, in life and death, doesn’t need aggrieved defence, help or advocacy his achievements to be tainted by vulture politicians seeking to portray him as the last man standing in the ashes of history. It’s unpalatable to frame public discourse as a zero-sum game, in which there are only winners and losers, in which only handful of losers are genuine and mean anything good for uganda.

For Besigye and Kyagulanyi to use Lwanga’s death a truncheon with which to bring President Museveni and NRM down a peg or three completely ignores the objective realities, appeal and affirmation Ugandans and the world accord them.

Besigye keeps jumping into the fray like a Superman only to realize that he cannot actually fly. His views are now delivered with such demented conviction, it’s easy to imagine Kizito Lwanga chuckling approvingly at Besigye’s withering wail. Clearly, Besigye and Kyagulanyi should get themselves a welder otherwise may soon find themselves in own burial chambers.

Ultimately, what counts most about leadership aren’t those ferociously vocal on every stupid angle but rather the ability to move the country into qualitative transformation in more than one way? Leadership is not just by the vocal few but gaining and sustaining the broad support and goodwill of the majority in the country which President Museveni and the NRM currently firmly have.

Ssemujju’s troubled speaker bid: How deep are the cracks Muntu left in FDC?

Ssemujju's troubled speaker bid: How deep are the cracks Muntu left in FDC?