The Supreme Court of Uganda has issued an official decree directing Bank of Uganda to pay costs to businessman Sudhir Ruparelia and his Meera Investments Ltd following its February 11th 2022 landmark ruling in the Crane Bank case.

In the 1st July, 2022 order, the Supreme Court also told Bank of Uganda to return Crane Bank to its shareholders since the appellant (Crane Bank Limited)’s receivership ended on 20th January, 2018. 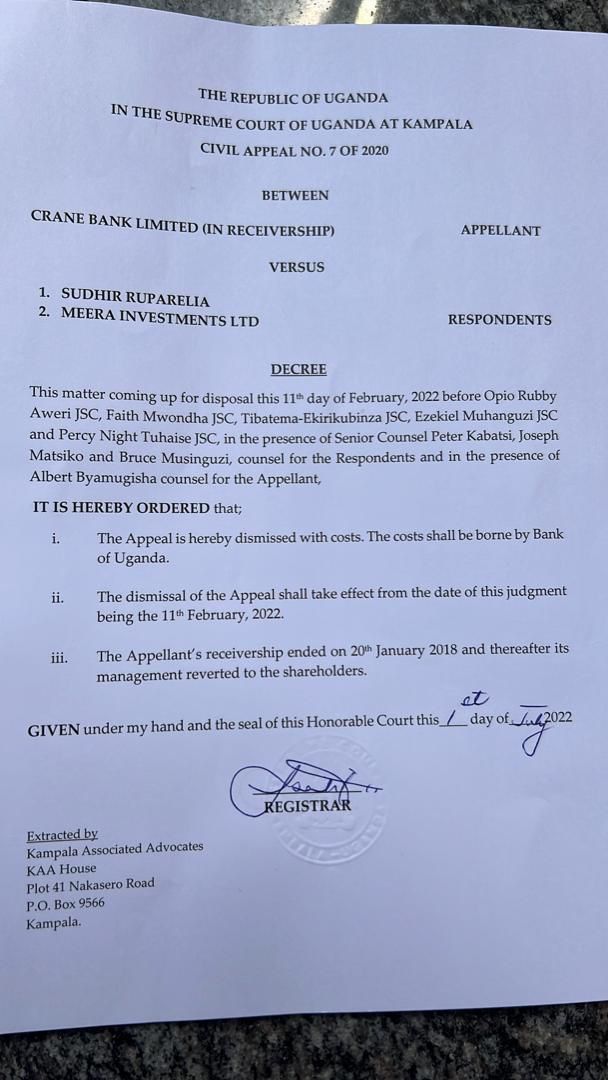 In February this year, the Supreme Court  dismissed Bank of Uganda’s appeal against Dr Sudhir & his Meera Investments company.

In its ruling, Court ordered BoU to directly pay costs at all court levels as well as return Crane Bank to its original owners.

The ruling was delivered by a panel of five Judges who included; Rubby Opio Aweri, Percy Tuhaise, Ezekiel Muhanguzi,Prof.Tibatemwa Ekirikubinza and Faith Mwondha.

“For avoidance of doubt, the Court of Appeal upheld the finding of the trial court which ordered that the costs of the suit were to be borne by the Bank of Uganda since it was behind the filing of the suit and other subsequent actions. That order shall stand,” the Supreme Court ruled.

Last year in September, Bank of Uganda decided to withdraw a Supreme Court appeal that was contesting the Court of Appeal’s dismissal of the case it filed on behalf of Crane Bank Ltd (in Receivership) vs. Sudhir Ruparelia and Meera Investments Ltd.

In a September 15, 2021 notice of withdrawal, the Supreme Court Registrar indicated that BoU had decided not to prosecute the appeal and would pay costs.

In 2020, Bank of Uganda ran to the Supreme Court to appeal the Court of Appeal ruling, which upheld an earlier High Court decision to dismiss a case that had been filed against businessman Sudhir by Crane Bank in receivership.

Prior, the Court of Appeal in Kampala threw out a case against Dr Sudhir.