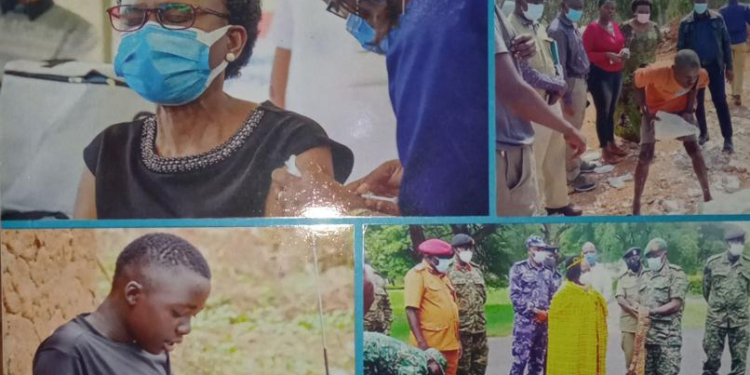 The Uganda Human Rights Commission-UHRC has called upon the government to enact a law on minimum wage to ensure better wages so that Ugandans who would otherwise go abroad as migrant workers get employment at home.

The call is contained in the 24th annual report on the status of Human Rights and Freedom in Uganda for the year 2021. The report shows that poverty and unemployment are the first and second factors respectively, which are pushing Ugandans abroad in search of greener pastures.

“As such, labor markets abroad, including in the Middle East, provide employment opportunities for Ugandans in the short run as the country develops its capacity to generate sufficient jobs for its labor force,” reads the report in part.

According to the Uganda Association of External Recruitment Agencies-UAERA, the monthly remunerations for domestic workers in Saudi Arabia ranged from 225 to 500 US dollars ( between 800,000 to 1.8 million Shillings), while factory workers on average earn between 350 and 700 US dollars ( approximately between 1.2 to 2.5 million shillings) in Qatar, UAE, and Saudi Arabia.

According to the report, female Ugandan migrants have reported physical and sexual abuse at the hands of male employers and sometimes rape and sexual assault while at work. A domestic worker in Saudi Arabia deported in October 2021 told UHRC that her employer was harsh to the extent that she poisoned her and locked her up in a room for eight months after she had demanded her six months’ salary arrears.

She was only rescued by neighbors who heard her scream in pain one afternoon and alerted the police. “Similarly, UHRC findings established that migrant workers suffered much physical, psychological and sexual abuse before and after departure and while employed. All the migrant workers that UHRC interacted with revealed that the overseas recruitment agencies rarely believed them when they reported suffering abuse, and instead, they accused the migrant workers of being lazy,” reads the report.

Adding that “some migrant workers return to work despite being very sick because they fear that they would be beaten in a manner similar to that of their colleagues who were thought to have refused to work.” Workers’ unions are some of the organizations that have for long been pushing for better pay and working conditions for Ugandans.

Agnes Kim Atwooki, the Chairperson of Women workers under the National Organization of Trade Unions-NOTU says that they agreed with the cabinet to introduce a living wage and a salary scale rather than a minimum wage.

As for scale alignment, levels are introduced depending on the level of education, and demand for services offered among other factors. “If we set a minimum wage, it might discourage Investors. But also, it can give leeway to investors to underpay for as long as they meet the minimum wage,” explained Atwooki.

She says that the Union is working with the government to have the structures in place such that all employees are catered for. She referred to the ongoing impasse between the government and teachers of Arts who have been denied an increment while their Science counterparts have had their salaries more than doubled.

Atwooki is of the view that enhancing some workers and not others shall lead to such collisions saying that having a systematic increase or determination of wages for all employees is the way to go. “The process is ongoing, we met the president and he asked us to make sure that everyone benefits, even a domestic worker. We agreed to have scale alignments and to start with Science professionals like science teachers,” said Atwooki.

In August 2019, President Yoweri Museveni declined to assent to the Minimum Wages Bill 2018 which Parliament had passed in February that year. The Bill sought to empower the Minister of Gender, Labor, and Social Development to appoint a Minimum wages Board to fix all minimum wages for various sectors. The Bill also mandated the Minister to announce the minimum wages annually.

President Museveni said that there were no gaps in the Minimum Wages Advisory Board and the Wages Council Act that the Bill seeks to cure. He argues that the current law is adequate and enforceable.