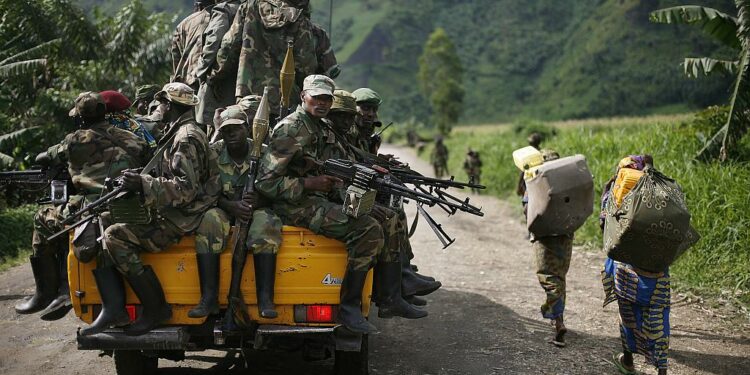 After three months of heavy fighting, the armed forces of the Democratic Republic of Congo finally surrendered and escaped to Uganda for their safety, leaving the strategic town of Bunagana in the hands of M23 rebels on Monday morning.

M23 rebels, who were one time, declared toothless in 2013 after being defeated, regrouped and emerged to form an almost formidable force that prompted the Congolese government to brand M23 as a terrorist organization.

This was before the same government accused the neighboring Rwanda of financing, planning, aiding and giving comfort to the M23 rebels.

Since M23 relaunched attacks in the DRC ON 28th March 2022, hundreds of thousands of asylum seekers have been flowing in Uganda through Kisoro District. Since then, more than 29,883 individuals of 15,495 Households have escaped the jaws of M23 to Uganda.

It has always been a culture of M23 to launch attacks at 5am in the morning when almost everyone is asleep.

On the fateful day of Monday (13/6/2022) M23 rebels launched their offensive as usual at 5am when the Congolese army wasn’t aware. The M23 rebels were more armed than ever to take over one of the most strategic towns that would succeed their missions.

Bunagana town is in Rutshuru Territory, North Kivu Province, in eastern Democratic Republic of the Congo, at the border with Uganda. It served as the headquarters of the M23 rebel militia in 2013.

The town is located approximately 73 kilometers by road, northeast of Goma, the provincial capital.

So, when the fighting started at around 5am, the unprepared forces of DRC were overpowered. What was thought to be the dying M23 rebels, being underrated, witnessed the national army of DRC abandon their military equipment and run away to Uganda for safety. At around 8.30 am, the town of Bunagana was in the hands of M23.

At least 137 FARDC (DRC army forces) and 37 Police officers from the DRC handed themselves over to the Uganda Peoples Defense Forces in Bunagana Town Uganda side.

According to the RDC of Kisoro Hajji Shafique Ssekandi,all government offices in DRC such as Immigration, customs, Police, Fisheries, closed and the officers are now in Uganda for their safety . All shops closed and civilians crossed to Uganda leaving their town to the M23 fighters.

On the fateful day, Over 30,000 asylum seekers spent the night in Uganda in villages along the borderline. The rebels did not allow any person to stay in Bunagana (Congo side).

The Congolese slept in churches, schools, on verandahs of shops and others under trees because their number was overwhelming.

The customs yard of Uganda is now full of cargo trucks which did not continue to Goma .

Uganda has deployed more forces along the border to ensure peace and stability.

The Congolese government has come out and officially declared that the M23 rebel outfit is sponsored by neighboring Rwanda which Kigali has denied.

This has prompted Congolese nationals to demonstrate against the Rwandan government’s alleged support to the rebels.

Wednesday’s demonstrations that happened in Goma, Eastern DRC attracted hundreds of people and one was left injured as reported by the AFP.

The crowd chanted slogans against Rwanda and its president Paul Kagame.

“No more Rwandans, let’s go and sort out Kagame,” was one.

“We are demonstrating against the M23’s incursion in the Democratic Republic of Congo.

“We are calling on the government to give us uniforms and weapons so that we can fight” the Rwandan army, a demonstrator who gave his name as Eric told AFP, to the applause of other demonstrators.

The UN report OF 2012 accused Rwanda of complicity in supplying weapons and soldiers to the rebels in DR Congo.

The UN said it had evidence that a rebellion in the Democratic Republic of Congo was being fuelled by recruits and support from neighboring Rwanda.

The UN report cited defecting soldiers, who said they had been trained in Rwanda under the pretext of joining the army, before being sent over the border to fight.

Relations between Kinshasa and Kigali have been strained since the mass arrival in DRC of Rwandan Hutus accused of slaughtering Tutsis during the 1994 Rwanda genocide that killed at least 800,000 people.

A primarily Congolese Tutsi militia that is one of scores of armed groups in eastern DRC, the M23 leapt to global prominence in 2012 when it captured Goma.