How big shots in government are illegaly taking over land, other assets in Bukedi leaving area residents languishing in poverty 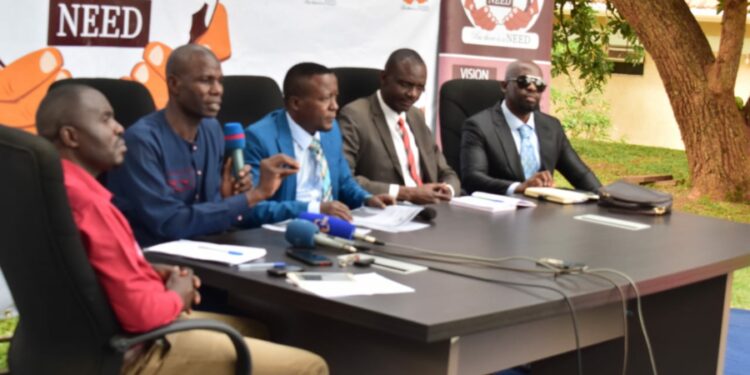 The residents of Bukedi Sub- region have accused some influential people in government of illegaly taking over their land and other natural resources, an undertaking that has left them in abject poverty.

Asuman Odaka, the National Economic Empowerment Dialogue (NEED) National Coordinator who hails from Bukedi said the sub-region has heavily paid the price of being mineral rich and that the indigenous people in the area have gained nothing from the current NRM government apart from languishing in poverty.

Mr Odaka made the assertion during the NEED weekly press conference, at the political movement’s headquarters in Kampala on Monday.

He said top officials in government have stripped off Bukedi of every natural resource including the iconic Tororo Rock.

“Bukedi like anyother region is facing a lot of problems. Land grabbing is at the peak.For years the Iteso and Japadhola have been fighting for the Tororo Rock which both tribes regard as their face of identity. I would like to inform you that the rock which is the tallest in Africa nolonger belongs to you. It was sold to an Indian investor (with a Ugandan passport) who works for a big person in goverment for a mere Shs93 million,” Mr Odaka said.

He added that Tororo Hospital no longer has a cemetery where it buries unclaimed bodies simply because the burial ground was grabbed and sold by some officials in government to an investor.

“Officials of Tororo Municipal Council irregularly sold the public land where unclaimed bodies were buried and instead bought an alternative land in Rubongi sun county to be used as cemetery. The buyer immediately fenced off the public cemetery land. In 2004, the Tororo District Land Board offered a lease over approximately 1,455 hectares of Cemetery land comprised in plot 14-20 Airport Road to the registered trustees of Indian origin for 49 years purportedly for purposes of dead bodies crematorium.”

He further disclosed that other public land like that of Golf Club, NARO, Airstrip, Rock High School , Robongi Barracks, King George Stadium as well as private land belonging to locals in Bukedi has since been grabbed by some top errant officials close to the ruling establishment.

“Years ago, the President went to Malaba to commission a government project- Inland Dry Port on private land. After commissioning, some officials raided the owner of the land Mr Osuna Otwani Wilson and forced him to sign a sales agreement. Following the incident, Mr Osuna ran mad for some good months. He has written various letters to the responsible authorities including the President but he has never been helped,”he added.

“The Rubongi barracks land was also grabbed. Today we are being told that the land is being given to Mukwano. The barracks is being shifted to Busitema Forest which habours baboons, thus destroying the wildlife.”

Mr Odaka also noted that the rampant land grabbing in the sub region is widely attributed to the affluence of natural wealth in the area.

“We believe every open space is being taken because of minerals like limestone, phosphate and gold or it is at the proximity of the border,” Mr Odaka explained.

“The stretch when entering Busia has gold and they dug an underground tunnel in the whole of Bukedi which they use to steal our resources behind our backs…. We need to fight together not against eachother, since we now know why the chief divider set us against each other.”

At the same conference, Higenyi Kembe, a rice farmer and a resident of Butaleja district also decried government’s intended move to take away the land they use for farming in the name of giving it to a Chinese investor.

“I farm rice because there’s nothing I can farm in Butaleja. The area is predominantly a wetland and we grow rice due to the existing circumstances. Therefore the economic activity is growing rice. By the way we are educated people but we have no jobs in this current government, so farming is our only source of income. Initially we grew cotton as our cash crop but the prices fell so we decided to resort to rice growing,”Mr Higenyi said.

“Unfortunately, government wants to take away our only source of livelihood by grabbing the privately owned swamp and giving it to the so called investor. If this swamp is taken, won’t we be condemned to death?”he wondered.

The farmer also lashed out at government for intentionally favoring  foreign rice farmers/dealers at the expense of their local counterparts.

“They deflate our rice prices by exposing us to cheap rice from foreign countries. They do it on purpose to keep us in poverty. We are grateful to NEED for exposing our plight to the country.”

On his part, Joseph Kabuleta, the NEED president said the current government under the leadership of Mr Yoweri Museveni has a core plan of keeping all parts of Uganda in poverty and Bukedi is not exceptional.

“His program of keeping Ugandans poor is spread throughout the country. He knows that 70 percent of Kibuku and Butaleja are swampy and the only viable economic activity residents can undertake is rice growing, but now he is bringing in Chinese to grow rice well knowing that the that’s the economic venture of the local people. He does this to keep Ugandans in poverty,” observed Mr Kabuleta.

“He first assesses the situation, gets to know what to do, then destroys your source of income. How greedy are these people. They have taken over everything.”